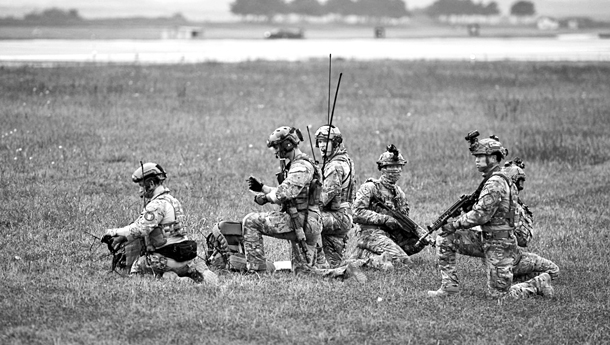 Soldiers are on standby as South Korean and U.S. Air Forces carry out a joint infiltration drill in Gunsan, North Jeolla, on Oct. 22. It is rare for the militaries to reveal they are conducting the “Teak Knife” joint exercise. [U.S. DEPARTMENT OF DEFENSE]

The joint infiltration drill took place between Oct. 12 and 26 at the air base in Gunsan, North Jeolla, and involved the South Korean Air Force’s Combat Control Team and the U.S. 353rd Special Operations Group (SOG).

“We conducted the annual ‘Teak Knife’ drill, infiltrating airborne troops behind enemy lines,” a Korean Air Force official said, “We were simulating a situation where we would infiltrate North Korea.”

The 353rd SOG, based at Kadena Airbase in Okinawa, Japan, is 800 strong and specializes in wartime and contingency plans. In the event of an emergency situation on the Korean Peninsula, this group will deploy U.S. troops for the infiltration of the North.

The South Korean Special Forces’ Combat Control Team would land behind enemy lines and deploy an antiaircraft gun to remove any obstacles and obtain information about the weather and conditions.

This drill, focusing on the aerial infiltration of special forces into North Korea and simulating the destruction of the regime’s key facilities, comes as Pyongyang conducted two nuclear tests and launched over 20 ballistic missiles this year alone.

While the Teak Knife exercise, designed to enhance the combat readiness of the U.S. and Korean special operations, has taken place since the 1990s, it is rare for the two countries’ militaries to make the drill and its purpose public.

The two allies, following North Korea’s fifth nuclear test on Sept. 9, have been bolstering the interoperability, or fluid cooperation, of special forces with the objective of surgically striking North Korea’s key facilities.

The South Korean Air Force also took part in the Red Flag joint exercise held in Alaska from Oct. 12 to 21, during which it sent six F-15K fighter jets, a C-130 Hercules transport aircraft and 147 personnel to the Eielson Air Force Base in Alaska for a three-week drill that was presided over by U.S. Pacific Air Forces, the military here revealed Wednesday.

The Red Flag advanced aerial combat training exercise dates back to 1975, and this year, the North Atlantic Treaty Organization (NATO) and New Zealand also took part in the drill.

South Korea has taken part in Red Flag since 2001 but for this year marked the first time its transport plane also carried U.S. troops for an infiltration operation.