Looking for belonging in ‘Family Happiness’

Looking for belonging in ‘Family Happiness’ 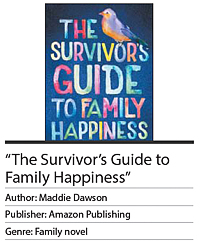 Maddie Dawson writes a charming story about family in her new novel, “The Survivor’s Guide to Family Happiness.” Readers are transported back and forth between a mother who gave up her baby for adoption and that daughter’s eventual journey to know the story of her life.

It’s 1979 and 17-year-old Phoebe Mullen is desperate. Her parents are dead and she lives with her newly married sister in a house that clearly sits on the wrong side of the tracks from her rich boyfriend Tilton O’Malley. Phoebe had Tilton’s baby two years ago and now they are expecting another child. His mother wants her son to go off to college and pretend all is right with the world.

Thirty-five years later, Nina Popkin finds herself starting a new chapter in her life. She’s officially an orphan, thanks to her mother’s cancer, is recently divorced and wants nothing more than to find her birth mother. After reaching a potential dead-end at the orphanage where she was dropped off when she was two years old, Nina learns she has a sister, Lindy, who lives in the same city. Lindy wants little to do with Nina or her quest.

Nina doesn’t take “no” for an answer - and Lindy gives in. Together, they uncover bits of information and eventually find Phoebe. They weren’t expecting the harsh reality that their mother didn’t want to be found.

Dawson weaves an endearing story of love and loss in “The Survivor’s Guide to Family Happiness.” Readers share Nina’s ups and downs as she tackles the origin of her story with optimism.

With every new discovery and every new adventure, Nina slowly realizes that “belonging” is a state of mind.