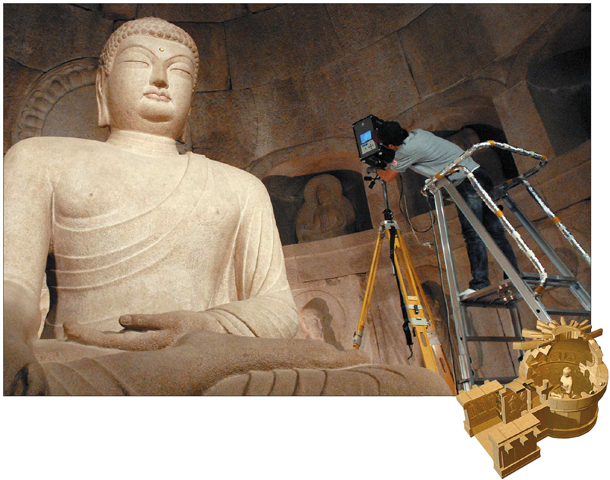 With Korea’s historic city of Gyeongju becoming highly vulnerable to earthquakes in recent months, many are concerned about the state of the country’s cultural heritage sites and treasures in the city.

Gyeongju, located in North Gyeongsang, served as the capital of Korea’s Silla Dynasty (57 B.C.-A.D. 935) for about 1,000 years. Among Korea’s ancient dynasties, Silla is usually thought to be one of the most forward-thinking and aggressive eras in art, culture and science.

Important treasures in the city include Cheomseongdae, a seventh-century astronomical observatory, as well as Seokguram Grotto, an eighth-century artificial stone cave that contains a Buddha statue and other rock art.

With Korea being a country highly invested in technology, some are pinning hopes of eternally preserving these cultural legacies using technologies like virtual reality, augmented reality and 3-D scanning and printing.

Although virtual reality, or VR, has been around for decades, the global industry is expected to get a much-needed boost this year with major companies like Google and Facebook adopting it for their entertainment businesses.

Entertainment like games and movies, of course, is the area often picked to benefit the most from VR. In May it was reported that there are plans for a new virtual reality film on Holocaust victim Anne Frank that will teleport moviegoers to Frank’s hideaway in Amsterdam.

Education is another field that VR can reshape. Google and U.S. schools are experimenting with virtual reality field trips. Under the plan, VR will help teleport students to places like the Great Wall of China, Australia’s Great Barrier Reef and the surface of Mars.

But what about in the area of cultural heritage and its preservation?

As Islamic State militants have assaulted treasures in recent years, digital preservation of cultural heritage has emerged as a possible solution.

The New York Times in March introduced a digital reproduction of a Roman triple arch in Palmyra, Syria that the Islamic State destroyed last year.

Alexy Karenowska, the director of technology at the Institute for Digital Archaeology told the newspaper that although the reproduction is “second best” to the original, digital reproduction draws attention to the fact that what’s destroyed can be rebuilt and that itself is a strong message.

Now, what about Korea?

The Korean government has been promoting VR technology since early this year. “Korea VR Festival,” a business fair, was held recently in Seoul. This was part of larger government program announced in July to help boost the industry.

In the culture sector, as well, the government is exploring what VR can do. At an exhibition on the royal tomb complex of the Joseon Dynasty (1392-1910) held at the National Palace Museum of Korea early this year, the ministry introduced a VR experience that takes people to the innermost zones of the royal tomb complex.

Pundits also say, besides helping people appreciate cultural heritage that is long gone, digital reproduction may also be a better option than some tangible reproduction that is widely considered a failure.

French statesman and novelist Andre Malraux (1901-76) in 1947 introduced the concept of a “museum without walls.”

He said reproduction had made it possible to bring out art from its historical location and origin.

Koreans nowadays are talking about “museums without artifacts.”

Case in point: an exhibition on Manwoldae, the 10th-century royal palace complex from Korea’s Goryeo Dynasty (918-1392).

The show was held in Seoul, at the National Palace Museum last year, but the problem was that the site of Manwoldae is in today’s Kaesong, North Korea and 10,000 artifacts uncovered from the site are also in North Korea.

This is where VR comes in.

Since 2007, South Korean archaeologists crossed the border and together with their North Korean counterparts conducted an excavation every year for a certain period.

Researchers in the area of digital archaeology also accompanied them and took 360 videos and photos of the area. With these images, officials created the palace as VR content.

Park Jin-ho, the head of the VR heritage team of Seoul National University’s Advanced Institute of Convergence Technology, took part in the project. “With VR, museums without artifacts have actually become a reality,” he said at a recent forum on VR.

Since 1999, he has conducted 3-D scanning on cultural heritage items and created VR content in Korea and countries like China and Cambodia. He is among the few in Korea who specialize in digital archaeology.

“The common denominator among these cultural heritage items is that they are all off limits to the general public,” Park said. “VR, however, makes all of these places accessible.”

In fact, according to Park, Gyeongju was where Korea’s digital archaeology first began. In 1999, the Gyeongju National Museum held an exhibition on roof tiles. For the exhibition, Park conducted a 3-D scan on some key roof tiles from Silla.

Also at the Gyeongju World Culture Expo in 2000, organizers recreated with VR technology the capital of Silla in its heyday, including the royal palace and surrounding structures. “The 3-D scanning of Silla’s relics can be considered the first major case of digital archaeology in Korea,” Park said.

Supporters of VR argue that digital reproduction of an artifact is as important as physical reproduction, and sometimes even better.

One of the most important cultural heritage items of North Jeolla is the site of the Mireuk Temple (Korea’s Historic Site No. 150) in Iksan.

In a design never seen at the time in East Asia, the seventh-century temple consisted of three zones. Each zone had a stone pagoda and a temple.

In fact, western pagoda (National Treasure No. 11) is one of the most famous relics in Korea. It is considered the oldest and the largest stone pagoda today in all of East Asia. Restoration began 17 years ago and is set to finish next year.

But the problem is the eastern pagoda.

In 1992, the authorities reconstructed the pagoda, of which only the foundation remained. But the reconstructed pagoda is widely considered a failure, even mocked as a “20th-century pagoda.”

Not only is its nine-story structure based on assumptions and no historical evidence, but the unnaturally white and machine-cut granite used in the construction gives it an artificial, brand-new look. This, observers say, clashes with the temple that has such a rich history and folklore.

This is the shortcoming of physical reproduction: Once it’s erected, it’s hard to take it back or make adjustments.

Woo Woon-tack, the director of Augmented Reality Research Center at the Korea Advanced Institute of Science and Technology (Kaist), agrees. “When a physical reproduction is made with inadequate historical grounds as for what artifact looked like originally, it’s hard to restore it,” he said in an email. “But virtual space is infinite and virtual content can be edited whenever if need rises. Plus, various versions can be made so that visitors can compare their experiences of different renderings,” he said.

Kaist’s Institute for IT Convergence recently opened the Augmented Reality Research Center to support researchers’ works in VR and AR. Officials said they will focus on areas like cultural heritage, education, entertainment, commerce and smart cities.

Woo’s institution on Oct. 7 hosted a forum entitled “Digital Cultural Heritage Forum” in Gyeongju, where participants discussed ways to apply VR and AR technologies to cultural heritage items. One of the sessions in the forum was dedicated to the site of Hwangnyong Temple (Korea’s Historic Site No. 6) in Gyeongju.

Hwangnyong Temple is considered another case where virtual reality can help reclaim its former glory.

The sixth-century temple is believed to have been the most important Buddhist temples of the Silla Dynasty, playing an important role in the religion and arts of the period.

There used to be a nine-story wooden pagoda on the temple grounds, which Queen Seondeok (unknown-647) of Silla erected in 643 to commemorate a victory against nine nearby countries.

A nonprofit organization related to Dongkuk Industries, a steel company, recently unveiled a structure inspired by the pagoda. The structure is not supposed to be a reproduction and is meant to be a cultural venue instead. Still, the structure has gotten people raising their eyebrows.

“The structure is made of 21st century materials and experiencing the temple as it was 1,300 years ago when Queen Seondeok built it is impossible,” Park noted.

Park Jin-ho says that the digital restoration of cultural heritage in Korea has seen notable strides since he first stepped into it in 1999, when few knew about it and few were interested in it.

In 2007, Naver, the country’s top web portal, added a definition of the term, “digital restoration,” to its dictionary. Also that year, Chonbuk National University introduced a six-month curriculum on the digital restoration of cultural heritage for the public.

However Park and other experts emphasize how 3-D scanning and making VR content is only a part of digital restoration of cultural heritage.

“Currently, most virtual reality content is merely experiencing the buildings from the past,” Woo said. “However, given that virtual and augmented reality allows transcending time and space, content has to be designed to help people experience various stories.”

In fact, Park works with writers, film crews as well as computer graphic specialists to make VR content. For the work on Seokguram Grotto, for instance, novelist Kim Tak-hwan helped write the script. Just like making a film, Park says, having a script in the pre-production stage helps.

For filming, he worked with Ha Seong-min, a director of photography who filmed the 2006 period movie “Forbidden Quest,” and Kim Wook, a lighting director for “Memories of Murder” (2003). For the post-production work, computer graphic specialists helped with effects like subtle light coming from behind the mandorla of the Buddha statue.

“Because digital restoration is based on video, the film industry is an area that digital conservators must work closely with,” Park said. “Digital restoration shouldn’t be just about showing buildings from the past. Only when people can meet with those who lived the era, talk with them and experience their way of living - hopefully with AI - can we call something a true digital restoration.”

Long-term investment to create an ecosystem of hardware and content is also important, critics point out.

This is Google’s latest venture into culture arts and education, after the Google Art Project in 2011.

“These children loved experiencing the Versailles of France, Taj Mahal of India as well as deep waters as they’ve been in the hospital for a long time,” Kate Park of Google Korea said.

But insiders also note that steady support from the government is a must.

Kim Derk-moon, director of the National Research Institute of Cultural Heritage’s research division of architectural heritage, said that depending on the characteristics of cultural heritage items, 3-D scanning and VR is sometimes needed or not needed.