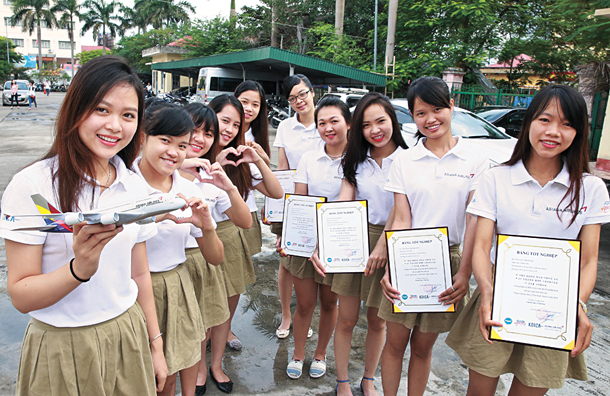 Asiana Airlines, which has a global fight network comprising 24 countries and 75 cities, is engaging in various social contribution activities both in Korea and abroad.

In March 2015, Asiana Airlines executives and staff pledged their support for students at Samraong Thum Elementary School under its “Happy Schools-Cambodia” project.

Since then, Asiana Airlines has been continuously supporting Samraong Thum Elementary School by handing out school supplies to students and installing computers.

In China, the company started its “Beautiful Classrooms” project in 2012, providing educational materials to students at Middle School No. 5 in the northeastern city of Yanji.

As of now, Asiana Airlines has ties with 25 schools across China. It has supported the schools with 1 billion won ($873,000) worth of educational supplies including 15 pianos, 32 beam projectors, 868 computers and more than 15,000 books.

In Vietnam, under a partnership with the Korea International Cooperation Agency and nonprofit organization Good People, Asiana Airlines has been holding employment support programs for Vietnamese women.

During the first job training session in October 2015, the program produced 130 graduates, and in October this year, 111 students have graduated from the program. At a job training center in Hai Duong Province near Hanoi, students are educated in basic service knowledge, computer skills, accounting and foreign languages such as English and Korean.

Asiana Airlines is actively engaging in contribution activities at home as well. As part of its “Rainbow Wings Lecture” series, pilots, flight attendants, engineers and airport service employees visit students all around Korea to talk about various jobs in the airline industry. Since its start in 2013, staff have visited 571 middle and high school students to support their dreams of working in the airline industry.