Russian vice gov. says it is high time to invest in Russia

Russian vice gov. says it is high time to invest in Russia 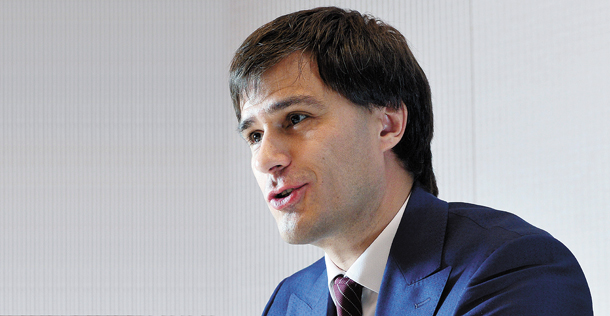 Russia is a country both near and far from Korea. Primorsky Krai, Russia’s farthest southeastern region, is only one hour and 30 minutes away by plane. But by avoiding North Korean air space and crossing over the Yellow Sea, it takes closer to two and a half hours.
The maritime province is a region that can be reached by car from North Korea, but from the South, as the land route is blocked, Russia may as well be a far-off country.

Following the Ukrainian crisis in 2014, Russia has faced sanctions from the Western world.

However, there has been increased exchange between Seoul and Moscow over developing economic cooperation, though generally, Russia has been more aggressive in pursuing such relations.

Ruslan U. Gattarov, vice governor of the Chelyabinsk region, highlighted the possibilities of economic cooperation between Korea and Russia, emphasizing that this is the time to invest in the province, as he sat for an interview with the JoongAng Ilbo earlier this month in Seoul, where he attended the J Global-Chatham House-Future Consensus Institute Forum.

Gattarov is a graduate of South Ural State University in Chelyabinsk, where he studied automobile engineering and received a master’s degree in biology at the same school. He previously served as a member of the Federation Council, Russia’s upper house.

Q. Can you describe the region of Chelyabinsk and your role as the vice governor of this region?

A. Chelyabinsk became well known worldwide following the 2013 meteor shower. It is located south of Moscow near the Ural Mountains, and I work there as the vice governor. I oversee economic cooperation and the information and communications technology departments and also am responsible for logistics, small and medium enterprises and the infrastructure sectors. Chelyabinsk, out of Russia’s 85 federal subjects, ranks ninth in population and economy. Currently, it is undergoing major economic development.


How many times have you visited Korea before and what did you do?

This is my sixth visit, including attending the forum. Russia has deep interest in Korea’s IT development trends. My objective of visiting likewise was to learn Korea’s experience, and the first place I ever visited was Samsung Electronics, which I always wanted to see. I also gained a lot of information from visiting the large online education company Sigong Media. I also visited AhnLab and shared experiences on IT security.


South Korea has suspended its participation in the Rajin-Khasan logistics project linking North Korea with Russia’s Maritime Province because of Pyongyang’s continuous provocations. Does Russia think this project should continue?

This project is being discussed in Moscow, and I dealt with this issue when I was a member of the Federation Council. Because unification is sought on the Korean Peninsula, I see this project as a means of pushing for talks with North Korea. If a gas pipeline or railroad from Russia passes through North Korea, it will also bring benefits to South Korea and profit North Korea as well. Investment in infrastructure can greatly enhance cooperation between countries.


Which areas do you think are most promising for economic cooperation with Korea?

There are many major conglomerates that are in Russia, including Hyundai, Kia, Samsung, Lotte and the former Daewoo. This in itself is symbolic of the potential between Korean and Russian economic cooperation. As Korean companies enter our market, factories are built and many jobs are created.


Development of the Maritime Province is part of Russian President Vladimir Putin’s new Far East policy. What is Korea’s role in this?

Currently, Russia’s infrastructure investment projects are spread out everywhere. If there is economic cooperation, there is the advantage of largely enhancing cooperation between two countries. In this aspect, it is worth noting that Russia not only is focusing on developing the maritime region but also a high-speed railroad project. During this visit, I had talks with the president of Hyundai Rotem. We want South Korea to actively participate in the railroad project.


South Korea and Russia have discussed development of Zarubino port in the Maritime Province, near the border with the North, for 20 years. Could this be used as leverage to bring North Korea to dialogue?

I have a positive outlook. Russia has interest in projects that can draw North Korea into cooperation. It would be good for North Koreans to come work in Zarubino because it is an opportunity for North Koreans to see how the world goes around. But talks between governments are a priority. Talks between governments need to deepen to increase the possibility of realizing such project. It is important for there to be a mediator between two countries that have a lot of conflict. And Russia will be able to play such a role.


The Russian Maritime Province is the starting point of the Trans-Siberian Railway (TSR), but there have been talks between Moscow and Tokyo recently of linking it with Japan. What is the reception of this idea in Moscow?

For the sake of stability in the entire Northeast Asian region, we view more positively a TSR passing through the Korean Peninsula rather than Japan. This will be beneficial to South Korea and draw a positive effect on North Korea. But to put this into practice, Korea has to put in a lot of effort and Russia’s cooperation is needed. Likewise, we need to increase economic projects because in order to raise the economic effect after the railroad is linked, import and export volume has to be increased.


Russia and China, with its Silk Road vision, are also cooperating to develop the Maritime Province, but does Moscow have any concerns about this leading to an influx of Chinese control in the region, which has a low Russian population?

Russia welcomes foreign investment in the Maritime Province. The more partners we have, the more stable the system becomes. We do not bar any nationalities in this aspect. China is already investing in the region. But compared to Japan, South Korea, with which we do not have any territorial disputes, can be called the best partner.


What areas should Korea invest in?

Russia, as you know, is currently facing U.S. economic sanctions, so we would like Korea to have interest in economics rather than politics. There is a lot of opportunity in Russia’s agricultural industry and import substitution.


North Korea continues to develop nuclear and missile programs, and unless it changes its attitude, it will be difficult to pursue projects like the TSR or linking of gas pipelines. How do we draw Pyongyang back to dialogue?

From my perspective, trust between the North and South is very lacking. Actually, South Korea is hearing a lot of the United States’ position, and this is greatly affecting its relationship with the North.

I want to say two things, that South Korea should be more independent and confident on the international stage. Also, joint projects can be a leverage point to draw North Korea out. It can be Korea-China projects or Korea-Russia projects. If these come about, these countries will in any form have a positive effect on inter-Korean relations.


You are a regional vice governor, so why are you directly involved in the railway project?

While I am vice governor this year, I am also tasked with managing projects geared toward the future. If the railway project is realized, this can raise the rate of economic growth by 30 percent. If economic and cultural exchange is encouraged as well, this can greatly expand Russia’s economic growth. What is most important for next year is to find investors and then decide what sort of benefits to give investors for the next 30 years if the railway is built.