Choi flies back to Korea and isn’t even questioned

Choi flies back to Korea and isn’t even questioned 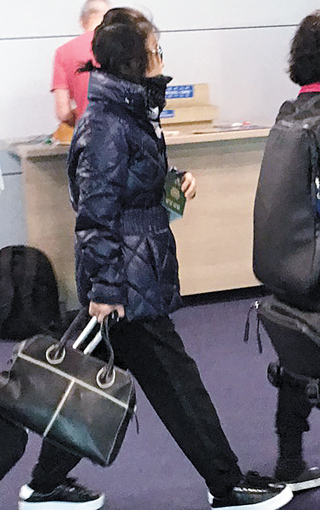 Choi Soon-sil, the controversial friend of the president suspected of pulling strings from behind the scenes in state affairs, returned to Korea Sunday morning and prosecutors failed to detain her - prompting complaints that they were giving her time to collude with associates and destroy evidence in the scandal.

Choi, the key figure in a snowballing scandal that is threatening the survival of the Park Geun-hye administration, landed at Incheon International Airport at 7:37 a.m. Sunday on a British Airways flight from Heathrow Airport in London.

Despite Choi’s assertion in an interview last Thursday with the Segye Ilbo that she would not come home due to health issues, she did and faced no detention.

Choi’s lawyer, Lee Kyung-jae, told reporters Sunday that he had requested prosecutors to give her a day or so to relax as she was fatigued from long hours of flight, a request that was accepted by the prosecution.

Lee, a former prosecutor, said Choi was willing to fully cooperate with the prosecutors in the ongoing probe into the so-called Choi-gate scandal, in which she is alleged to have meddled in the administration’s decisions and embezzled funds from two nonprofit foundations.

Chung Yoo-ra, Choi’s daughter, didn’t come with her mother. She is at the center of her own branch of the scandal involving whether she enjoyed favorable treatment when admitted to Ewha Womans University.

“She expresses deep sorrow to the public for the deep disappointment and frustration she has caused,” Lee said.

The prosecutors’ decision to not detain Choi Sunday enraged the opposition, which said it was unprecedented for such a high-profile scandal and its central figure.

“People are enraged hearing Choi’s lawyer read a statement on behalf of Choi while the Justice Ministry is doing nothing,” said Choo Mi-ae, chairwoman of the opposition Minjoo Party, who demanded Choi’s immediate arrest.

“People are wondering whether prosecutors are acting like prosecutors or public defense lawyers for Choi instead,” said Justice Party Chairwoman Sim Sang-jeong.

A prosecutor involved in the case told reporters Sunday the investigation team would summon Choi for questioning “at the right time.”

The prosecutor, who spoke on the condition of anonymity, refused to confirm Choi’s whereabouts in the country and said an investigating team was in contact with Choi through her lawyer.

The special investigation team, helmed by the head of the Seoul Central District Prosecutors’ Office Lee Young-ryeol, said it has obtained seven boxes of material from the Blue House.

The presidential office refused to let prosecutors raid its offices, citing laws banning leaks of classified information. The contents of the seven boxes were put together by the Blue House.

Former and current officials of the Mi-R and K-Sports foundations were questioned by prosecutors Sunday, including Jung Hyun-sik, former secretary of K-Sports Foundation.

On his way to the prosecutors’ office Sunday, Jung reaffirmed he was contacted by An Chong-bum, former senior secretary for policy coordination at the Blue House, in regard to receiving donations from conglomerates.

The two foundations received 77.4 billion won ($68.4 million) in total only days after their launches.

That impressive achievement led to suspicions that Choi strong-armed conglomerates to make contributions using her connection with the president through presidential secretary An, whose resignation was accepted by President Park Sunday.

The foundations themselves have been described by critics as mere slush funds for Park’s use after she leaves office.