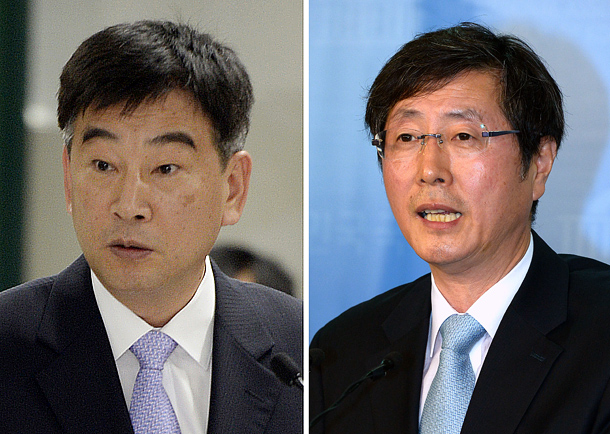 President Park Geun-hye on Sunday appointed two new presidential secretaries and officially signed off on the resignations of eight other key aides in her latest attempt to appease growing public ire on allegations about the influence exerted by longtime friend Choi Soon-sil.

Nicknamed “doorknobs to the president,” Jeong Ho-seong, Lee Jae-man and Ahn Bong-geun were President Park’s closest aides in the Blue House. Park had long resisted pressure to fire Woo Byung-woo, who was at the center of a string of corruption scandals.

The Blue House said in a statement that replacements for the vacancies will be announced soon.

“President Park takes the current situation very seriously,” said Jung Youn-kuk, a Blue House spokesman, adding that the reshuffle was a “quick response” to requests from all levels of society.

Letting her three “doorknobs” go was a “highly significant gesture,” a source from the Blue House said, because Park had been working with them very closely over the past 18 years, ever since she entered politics.

On the same day, Kim Chong, second vice minister of culture, sports and tourism, submitted his resignation, citing difficulties doing his work amid the scandal.

The Blue House reshuffle was announced hours after Rep. Kim Sung-won, spokesman of the ruling Saenuri Party, said that the party’s leadership decided through an urgent Supreme Council meeting to formally request the Blue House create a nonpartisan cabinet.

A general assembly of Saenuri lawmakers was scheduled to be held today at 2 p.m. in order to hear opinions on the latest decision outside the leadership circle, which is mostly composed of Park loyalists.

Another key agenda item in today’s meeting will be whether to ask the president to appoint a new prime minister based on a bipartisan recommendation, Kim said, a move that would reduce the power of the presidency. The spokesman didn’t name any possible candidates for the role.

Nam Kyung-pil, a Saenuri Party presidential contender who currently serves as the governor of Gyeonggi, wrote on his Facebook page that the new prime minister would have to embrace both the ruling and opposition parties, saying that Kim Chong-in, former leader of the main opposition Minjoo Party of Korea, would be the perfect fit.

“The utmost priority right now is to get to the bottom of the [Choi Soon-sil] case,” said spokesman Kim.

On another front, Prime Minister Hwang Kyo-ahn vowed to preside over a ministerial meeting every day starting today.

The temporary meetings, which Hwang says will be held for some time, aim to respond to major domestic issues as swiftly as possible.