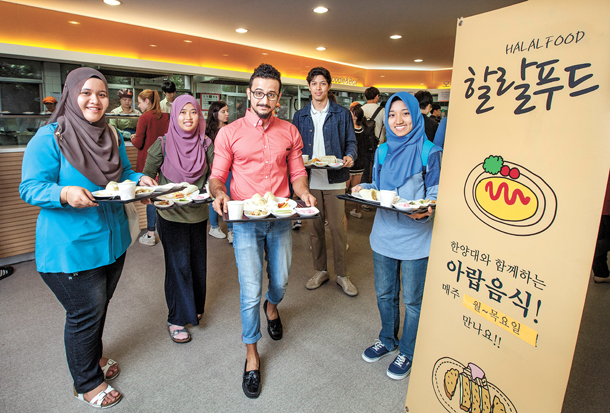 Eating out in Korea is never easy for Nurul Atiqah Binti Maarut. A Muslim from Malaysia, where the official religion is Islam, grabbing meals in a foreign country that’s obsessed with pork means she always has to be cautious about what’s in her food.

The question pops up so naturally now: “Does it have pork inside?” Rarely does a denial calm her jitters.

But at Hanyang University in Seongdong District, eastern Seoul, where she studies chemical engineering on a government scholarship, the concern never crosses her mind. Among the seven cafeterias at the school, one exclusively serves halal food. For 4,500 won ($4) per meal, Binti Maarut can finally grab a bite to eat in the school’s cafeteria like any other student.

“It’s hard to find halal beef in Korea, so my favorite menu item here is definitely the steak,” she said earlier this month at the food court, her eyes set on a chicken burrito. “I heard about this place even before I arrived in Korea. It’s one of the main reasons why I chose to study at Hanyang.” 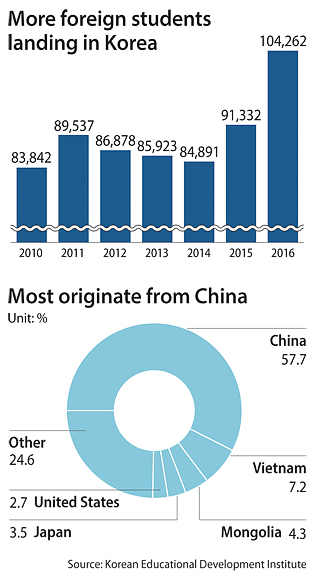 Binti Maarut, 21, is one of over 100,000 foreign students in Korea, the first time the country has achieved the landmark figure, according to recent government reports.

Schools like Hanyang, which in 2013 became the first university in Korea to open a halal restaurant, are now trying to make sure the tide never ebbs by offering a number of incentives and ensuring convenience on and off campus. In terms of changing or implementing new facilities for foreign students, many schools are especially warming up to Muslims, whose customs require special attention.

“When Hanyang University reached out to us years ago,” said the manager of the halal restaurant, “I was told there were a lot of Muslim students on campus skipping meals because they couldn’t find anything or anywhere to eat.”

“The feedback has been tremendous so far. Muslims love it here.”

Kookmin University opened the first prayer room for Muslim students in 2010, and many universities in Korea, including Yonsei, Kyung Hee and others, have followed suit. Sogang University, a Jesuit school, opened what it calls a “multicultural praying room.” Ewha Womans University has restrooms installed with toilets that cater to Muslims.

Sun Moon University in Asan, South Chungcheong, founded and run by the Unification Church, operates a halal restaurant and established a research center on Islamic studies, saying it would “respect various religions” through the gesture.

In general, international students are provided with scholarships, priority access to dormitories, free or discounted Korean lessons and one-on-one counseling covering various topics from everyday life to how to find a job after graduation.

“The task to build a global campus has become an irreversible trend,” said Heo Jeong-in, assistant manager of the Center for International Students at Dongguk University. “Our mission is to enable foreigners to coexist with the Korean students.”

News that Korea has over 100,000 foreign students comes at a very critical time in the country, where the dipping fertility rate - 1.2, the lowest among OECD countries - is swiftly changing demographics and taking its toll on school systems.

The number of applicants for this year’s College Scholastic Ability Test (CSAT), the chief barometer for college admissions in Korea, shrunk for the sixth time in a row.

Pundits claim that, in less than two years, the number of test-takers will be fewer than the total amount of students needed for quotas in local universities. With fewer Koreans going to college now, many schools are relying on the foreign influx to solve the problems that a smaller campus faces.

“[The tuition is] a solid source of income, especially for schools outside of Seoul and Gyeonggi that struggle to attract students and suffer financially,” an official at a top-tier university in Seoul said, requesting anonymity to speak candidly.

Park Jin, director of the Office of International Affairs at Chung-Ang University in Seoul, said his school is focusing on attracting foreigners to its most popular departments out of fear that Chung-Ang might lose its competitive edge.

“The shrinking school-age population and rise of online education opportunities mean schools without specialized education programs are prone to die out,” said Park. “It’s crucial that we back up our strongest departments with international talent.”

Having more foreign nationals on campus also has a direct impact on schools’ internationalization index, which contributes a key portion of domestic and global rankings.

Lobna Ashraf, who hails from Egypt and earned her master’s degree in Korean literature at a prominent university in Seoul this year, said it was her fond memories at Chungnam National University in 2013 that encouraged her to further her studies in this country. There, she spent a semester studying Korean at a language institute affiliated with the school.

“I didn’t know anything about Daejeon, or life in Korea overall,” she said. “But I had a Korean student-helper who always asked me what difficulties I was going through, and how she or the school could help out.

“She was always one step ahead of me.”

The Egyptian, however, was quick to add that she struggled in her latest school.

“I received absolutely no such help from my graduate school,” she lamented. “I had to do everything on my own: write my thesis in Korean, give presentations fully in Korean and write all my reports in Korean.”

Although the training did help her speak the language better, the down side was that she was unable to critically understand her studies in-depth, she confided.

Every year, roughly five percent of all international students drop out of school, mainly citing difficulties catching up with their classes. At some schools, mostly outside Seoul and Gyeonggi, the figure surpasses 10 percent, offering fresh fodder for critics who claim that universities - principally, the government - are setting the Korean language bar too low for foreigners.

The government requires foreigners to score a level 2 or above on the six-level Test of Proficiency in Korean (Topik) exam in order to gain university admission. From there, each school sets their own requirements.

A level 2 is considered a beginner’s level, which can, according to official Topik guidelines: make phone calls, ask favors, use public facilities; minimally distinguish between formal and informal Korean and when using each is appropriate; and use a vocabulary between 1,500 and 2,000 words to create and understand dialogues.

The current requirement was downgraded from level 3 in December 2015, when several universities lobbied the government to ease requirements for international admissions.

“The key problem,” said Lim Hee-sung, a researcher at Korea Higher Education Research Institute, “is that several universities in Korea are attracting foreign students who can’t even speak Korean.

They get intrigued by all the incentives and benefits that Korean schools promise them, only to arrive and find out they can’t communicate.”

A faculty member who works at a university that has thousands of international students enrolled admitted the side effects and added that local professors, too, struggle.

“A lot of professors complain about having too many foreigners in their class, because often times, the students can’t understand anything,” the source said. “Korean students don’t want them as their partners during group projects.”

In solving the rising issues, his school began to consider placing higher standards for international students. But shunning them off completely is nowhere on the discussion table.

“They’re a solid financial support for us,” he shrugged. “For everyone.”