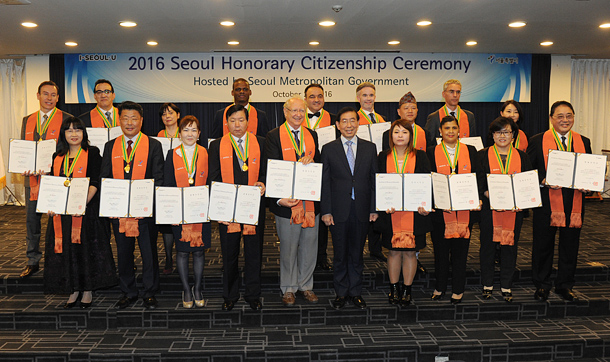 Seoul Mayor Park Won-soon on Friday named 21 people from 14 countries honorary citizens of Seoul, continuing a tradition of honoring foreign residents who have made singular contributions to the city’s development.

“You are not guests here in Seoul, but masters of the city,” Park said. “If you have any ideas of what Seoul can do better, please do contribute and let us build this city together.

“Who knows,” he added, “one of you here may be the next mayor of Seoul.”

Such honorary appointments have been made since 1958.

The 18 honorary citizens of Seoul who could attend a ceremony at the Sejong Center for the Performing Arts on Friday celebrated with 200 guests who filled the banquet hall, including friends, family and guests from various embassies. Three could not make the ceremony due to business or scheduling conflicts.

“I knew in the first three days I was in Seoul, which was in 1981, that I would come back to live here,” said Elisabeth Chabanol, head of the Seoul branch office of the French School of Asian Studies, who gave an opening speech on behalf of the honorary citizens. “I still remember the colors of the Gyeongbok Palace, of the stone there, and the blue sky. And now it has been 30 years since I studied the archaeology, arts and culture of Korea, my studies spanning from the ages of Baekje to Silla, Goryeo and Joseon dynasties.”

“I am extremely grateful,” said Ausprung, CEO of Han Sung Motor, the official dealer for Mercedes-Benz in Korea. Han Sung has been running a program called Dream Gream since 2012 which pairs up artists and students from low-income families for training in the arts. “The honorary citizenship is also a reassurance that we are doing the right thing, and a reassurance in continuing and intensifying what we are doing.”

Old-timers joined in the celebrations.

“It’s great to see the way people are contributing to Seoul,” said Robert Gilbert, the recipient of an honorary citizenship in 2000 and a lawyer at Kim & Chang, who has been living in Seoul since 1981. “I was also in FIAC, and we spent a number of years trying to develop ideas on how we can make Seoul more attractive to foreign investment and residents, and I see today that a lot of people are doing exactly those kinds of things.”

“Obviously,” he added, “we all love Seoul, we’ve been here for a long time, and we have resources and abilities that might be put to good use, so we’re thinking about getting the honorary citizens together to create something interesting for the city.”