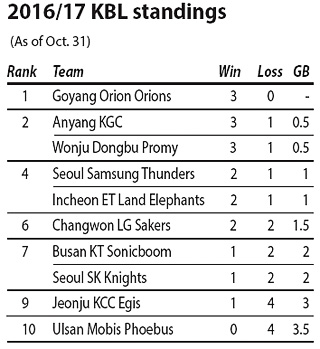 Phoebus flounders in the dark while Park carries Elephants

After the first week of the 2016-17 Korean Basketball League (KBL) season, the Phoebus, who have 10 KBL championship titles on their shelf, are ranked at the bottom, losing four games straight since the opening day on Oct. 22.

During the opening day match against the Incheon ET Land Elephants, Yang Dong-geun, the captain and point guard for Phoebus, broke his wrist, which landed him on a surgical bed immediately after. As a result of the surgery, Yang will be sidelined for the next three months, which means Phoebus will have to make do without their franchise star.

Yang, who has won four MVP honors with Phoebus, is arguably the best player in the league right now, and head coach Yoo Jae-hak and the rest of the squad heavily depended on his ability to run things on the court in the past seasons.

This is not the first time Phoebus has been left to make do without Yang. Last year, Yang was out for the earlier part of the season, as he was playing for the national team.

The team was able to anticipate Yang’s absence and its tactics for the earlier in the season were planned out before the season began. The Phoebus eventually finished the regular season as runners-up.

However, the gravity of his absence will be different this time around since it wasn’t something expected from the start. In addition to losing Yang, Nate Miller, an import who was thought to replace Yang for the time-being, injured his hamstring on Sunday while Phoebus suffered 74-85 loss to the Changwon LG Sakers.

Losing his players from left and right within a span of a week, Yoo says he is at a loss for words.

The Phoebus went into the season on an auspicious note, picking super-rookie Lee Jong-hyun at this year’s draft. However, just a couple of weeks into the season now, it is questionable whether Phoebus will be able to cope with these unexpected turns of events.

As for the super-rookie Lee, he is yet to make his debut on the court as the center is still recuperating from a foot injury he suffered earlier in the year. 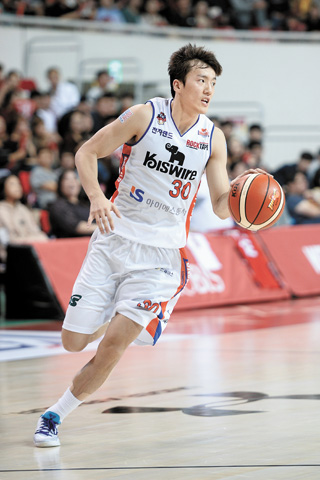 Although early in the season, some players are rising to the prominence above others, including Park Chan-hee, a point guard for Incheon ET Land Elephants.

After their three-game winning spree, Wonju Dongbu Promy were to meet the Elephants in Incheon on Sunday.

The Promy have raked in more than 90 points in the first three games of the season and they were expected to carry on the momentum against the Elephants. But to everyone’s surprise, the host took down the visitor 80-77, with Park leading on the court.

Park, a new face for the Elephants who transferred from Anyang KGC, first turned pro in 2010, donning the KGC uniform as first pick out of the rookie draft that year.

In his rookie season, Park played in 44 games, averaging 34 minutes, 11.95 points and 4.3 assists. Since then, he’s been starting point guard for Anyang, steadily showing his face more on the court.

To reel in such talent, the Elephants had to trade Han Hee-won, a forward they brought on as second pick from the 2015 rookie draft. Although a bold move, Park has been doing more than his share since he joined the new team.

In a 80-63 win over Ulsan Mobis Phoebus on Oct. 22, Park tallied six points, six steals and nine assists, a testament to his capability as a point guard.

Against his former club KGC on Monday, although the Elephants lost by one point, Park scored four points and again dished out nine assists.

And Park did not stop providing for the Elephants.

In the third game of the season against the Promy, Park put up 20 points, grabbed four rebounds and dished out six assists.

When the team was behind by one point with one minute and 30 seconds left in the game, Park calmly drained two free throws to give his team the lead.

After the game, the Elephants’ season record stood at two wins and one loss.