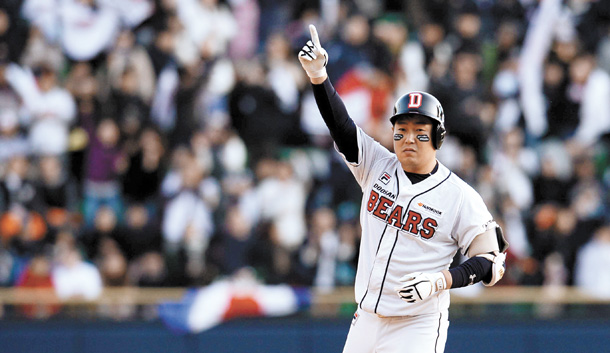 Yang Eui-ji, the catcher for the Doosan Bears, celebrates after hitting a RBI double on Sunday against the NC Dinos. The Bears are in a 2-0 lead at this year’s Korean Series. After a day off, the third game of the Series will be played tonight. [NEWSIS]

The Doosan Bears have a 2-0 advantage over the NC Dinos in this year’s Korean Series. While the starting pitchers of the Bears held up strong on the mound, starting catcher Yang Eui-ji was the guiding hand responsible for the winning day.

In the history of the Korean Series, in 15 out of 17 times, the team that claimed two victories from the first and second game of the series claimed the championship title, which means at the moment, the odds are in favor of the Bears.

With the Bears taking the win, it was their starting pitchers, Dustin Nippert and Chang, who were considered the impetus behind the team’s success. While Nippert had a perfect stint on Saturday, Chang only conceded one run while on the mound for eight and 2/3 innings on Sunday. But those more familiar with the game, as well as the pitchers themselves, tipped their caps to Yang for the win, who was behind the plate for 20 innings over the weekend.

Managers on both sides were first ones to recognize the talent behind the scenes. “A 10 out of 10,” said Kim Tae-hyeong, the manager of the Bears, about Yang’s performance. Kim Kyung-moon, the skipper of the Dinos and a former catcher himself, concurred, “He led the pitchers to throw in such a pattern that essentially threw off those on plate. Ingenious effort behind the plate.”

On Saturday, Yang called for fastballs early in the game. He knew Nippert’s shoulder was in good enough condition to toss fastballs at maximum velocity. After a few innings, Yang began to lead Nippert to toss more sliders and changeups.

Yang’s tactic for the second game on Sunday was more or less similar. Well aware that Chang has not had any time on the mound for nearly 40 days and needed a few tries to get his shoulder going, the catcher called out on fastballs in the earlier innings, eventually mixing in changeups later.

“Nippert and Yang have been working together for some time now,” said Kim. “I rarely see Nippert shaking his head more than twice these days. I think Yang knows what sort of pitch Nippert wants to throw. And the chemistry between Chang and Yang in the second game was also top notch.”

For the 29-year-old, this is his fifth postseason in the Korea Baseball Organization (KBO), which means he feels at home being where his team is right now and does not shy away from exploiting the depth of his experience.

During the game, he would approach the mound and throw a joke here and there to relieve the pitcher of some stress and pressure, as well as to pause the game when in a pinch. His ability to lead the pitcher as well as the tempo of the game is what makes him a “sly old fox.”

And the catcher deems his performance in defense pivotal for the success of his team. “Everything comes down to defense in the postseason,” said Yang.

The catcher, however, was as fired up with his bat as he was with his mitt. In the second game on Sunday, Yang went 3-for-4 with two runs batted in (RBI). He tallied his first RBI in the fourth inning, which broke the deadlock of the match and gave his team the lead. He dumped an RBI single in the eighth, too, which sealed the Bears victory. His two-way contribution made him the MVP of the day.

But the catcher did not take the credit for himself. “I was lucky enough to meet such great pitchers,” he said. “I had a few decent hits in the second game and that led to good plays defensively.”

The third game of the Korean Series is slated for today at the home of the Dinos, the Masan Baseball Stadium, in Changwon, South Gyeongsang.