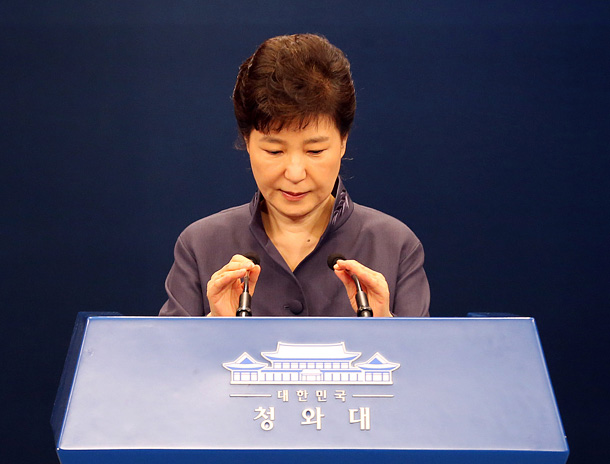 President Park Geun-hye adjusts her microphones before apologizing for the Choi Soon-sil scandal at the Blue House on Oct. 25. [JOINT PRESS CORPS]

Scenes that should only be encountered in fiction are playing out before our eyes. Rumors of all kinds of spooky rituals and cult behavior have become common on the Internet and TV news. A former male escort in a host bar is implicated as a key member of the inner circle of Choi Soon-sil, who is believed to have exercised enormous power over President Park Geun-hye.

Choi angered all the middle-aged women in the country by saying she has merely been rewarded for keeping loyal to her friend Park. Her daughter has had the local equestrian community as well as a top university grovel at her feet, enraging all the young people with a casual comment that people should resent their parents — not her — for their frustrated desires.

People are not sure how much to believe or disbelieve about the president anymore. Truly anything seems plausible at this point. Park previously said it was an insult to claim she was under another’s control and resisted kicking out three of her aides accused of leaking presidential documents. But all that turned out to be lies. Everyone feels they have been deceived. Her televised excuse that she merely asked her friend’s advice on speeches to be extra careful with the words she used doesn’t convince anyone.

The country now believes Park was manipulated by Choi and her father Choi Tae-min, who before his death was a so-called mentor to the first daughter of a powerful president. Former lawmaker Jeon Yeo-ok even said that Park does not forgive anyone who irks her or talks badly about her. “There is only one that she is forever generous about. That is her.”

The Korean Neuropsychiatric Association held an academic conference in Gwangju over the weekend. The theme was treatment for the six million people in this country suffering from depression. But off stage, the doctors who came from all over the country mainly talked about the scandal with Choi Soon-sil.

“It appears that Park’s ego seems to have been affected by growing up isolated in the presidential palace from the age of 11 to 27,” they diagnosed.

“After her mother, who strongly advised against any favorable treatment to her child, died, nobody was able to speak straight to the over-indulgent princess. An overly self-engrossed person is attracted to fawners and shuns critics. She would have suffered tremendously after the sudden killing and loss of her parents. Fear and a sense of betrayal would have built paranoid suspicion of others.”

The psychiatrists went on with their diagnosis:

“A self-imposed exile for nearly two decades from 1980 could have decisively shaped her disconnected personality. According to Takashi Okada, a Japanese authority on personality disorders and developmental disabilities, a strong-minded person in hermetic isolation is more susceptible to persistent and repeated feeds of a certain message, and therefore is easier to manipulate. As a result, one comes to believe that he or she has made a choice out of self will even under restrictive conditions.

“The common behavioral fallout is the so-called double-bind, a psychological impasse in which someone in power is forced to accept contradictory demands unconsciously after receiving them repeatedly. Another is the tunneling effect, where the mind has little room left to devote to others after being exposed to the controlled information and environment. Because of the vulnerability of the human mind, famous people like Tom Cruise and John Travolta turn to unconventional religious sects like Scientology. Psychological manipulation is scientific and a common practice.”

The president’s approval rating has plummeted to 17 percent. We have come to a political impasse. We now have to expect radical action by the people involved and uncertainty in inter-Korean relations. We may have to employ a subtle psychological approach to solve the problem instead of a socio-scientific method. Psychologists all advise that the president should tell the truth and convince the people that our society moves on legitimate systems and not by the power of a few.

Changing the governing system to give more power to the prime minister or the legislature can come later. In the turbulent final year of the administration of president Lee Myung-bak, the government could be sustained by competent cabinet members like prime minster Kim Hwang-sik, defense minister Kim Kwan-jin and financial chief Kim Suk-dong. They were not Lee’s confidants.

This country is not weak. It had been democratized, diversified and strengthened over the last half century. Companies and bureaucrats overcame five lame-duck periods. We hope the president will face the light. She must have faith in this country.