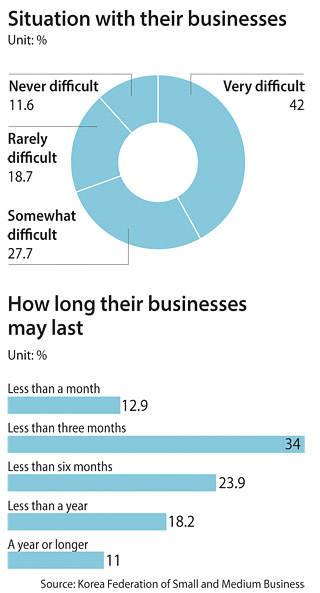 Three out of 10 small- and medium-sized businesses are considering shutting down in the wake of the new anticorruption law, a poll showed on Monday. They want the law revised.

The Korea Federation of Small and Medium Business asked 300 wholesalers, retailers, restaurants and flower shops about the impact of the so-called Kim Young-ran Act in the past month and 69.7 percent responded that their situation has worsened.

Sixty-five percent of the respondents said their revenue has shrunk and the average shrinkage was 39.7 percent. Some 62 percent said their customers had declined by 40.3 percent.

The smaller the size of the business, the greater the impact of the act. Seventy-six percent of businesses with nine or fewer employees complained about a worse situation compared to a month earlier, whereas only 57 percent of companies with 10 or more workers had that reply.

According to the federation, its small enterprise members - wholesalers of flowers, agricultural, fishery and livestock products as well as restaurants - numbered 44,500 as of 2010, when the latest data is available, and had combined revenues of 41.2 trillion won ($36 billion).

When asked if the law is being administered in a manner that will reach its goals, only 30.3 percent of the participants answered positively, following 23.4 percent who reacted negatively. Forty-six percent said they don’t know.

“The side effects of the antigraft law turned out to be much bigger than expected and smaller business owners can hardly manage the damage,” said Kim Kyung-man, head of the policy development division at the federation. “[The government] is advised to seek measures to rescue smaller businesses that are suffering unexpected damages.”

Some 48 percent of the respondents said the law - aimed at civil servants, employees of public service organizations, journalists and teachers - should be revised to raise the cap on the price of meals (now at 30,0000 won), gifts (50,000 won ) and congratulatory cash gifts (100,000 won) that officials can receive at events that are not open to the public.

Thirty-eight percent said some items affected by the law should be adjusted, whereas 37 percent said the government should come up with policies to boost consumption. Respondents could choose multiple answers.

The law affects officials at some 41,000 organizations nationwide, 96.8 percent of which are schools and media outlets.

Around 9 percent of the Korean workforce falls under the provisions of the new law.