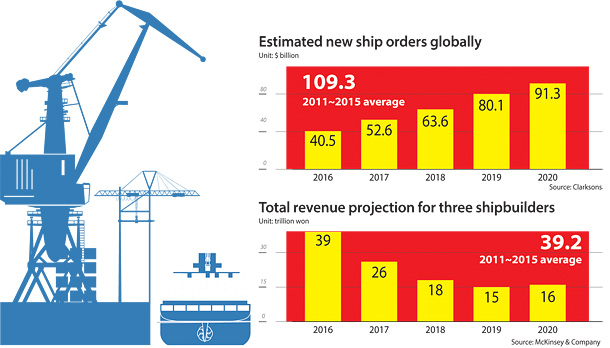 The government announced a plan to help the struggling shipping and shipbuilding industries on Monday, although it did not pull the plug on the terminally ill Daewoo Shipbuilding & Marine Engineering (DSME).

To support nation’s shipbuilders, the government will order ships itself and give financial benefits that will help companies order more ships. Total government spending on the plan will be 11 trillion won ($9.6 billion) by 2020, which translates into orders for 250 vessels.

The three major shipbuilders - Hyundai Heavy Industries (HHI), Samsung Heavy Industries (SHI) and DSME - will follow government plans to reduce the number of docks by 23 percent, from 31 docks to 24, and downsize 32 percent of their total workforce from 62,000 employees to 42,000 by 2018.

“The global shipbuilding industry is likely to improve from 2018 but the market will not be able to perform as well as it did in the early 2010s,” said Yoo Il-ho, Deputy Prime Minister and Minister of Strategy and Finance on Monday.

Consulting firm McKinsey & Company predicts that orders received by Korean shipbuilders from 2016 to 2020 will only be around 34 percent of what they received in the past five years. The U.K.-based shipping service group Clarkson estimates the figure at 50 percent.

To prepare for a drought in orders to build ships, the government will create demand. According to the Finance Ministry, the government will spend 7.5 trillion won by 2018 on 63 ships for public use, which include battleships and patrol boats. They will spend another 3.7 trillion won by 2020 to encourage shipowners to order 75 ships. It will give various financial benefits such as extending loan due dates for companies opting to order small and midsize vessels such as coastal cargo ships and passenger ships, which will help add 115 new orders for shipbuilders. In total, that is about 11 trillion won to be spent by the government to either directly order ships or help shipbuilders get orders.

Shipbuilders will push through with government-proposed turnaround plans that include reducing the number of dockyards and employees.

HHI will stop operating three dockyards that have been idle due to lack of orders. It will sell its non-core assets, worth 1.5 trillion won, and also spin off businesses unrelated to shipbuilding, such as its robotics and green energy businesses.

SHI will sell its hotel business lines and increase capital by issuing new stock worth 1.1 trillion won. DSME will gradually shake off its offshore plant business, which incurred massive losses for the company, and sell off its 14 subsidiaries and real estate other than shipbuilding yards.

While an exact number of layoffs has not been set for all shipbuilders, the government said DSME will lay off 41 percent of its workforce, about 5,500 employees by 2018.

The fate of DSME has been a major concern of industry insiders.

Finance Minister Yoo said, “DSME will reform its businesses to focus on areas of competence such as merchant ships and find a professional and responsible management to properly lead the company in the mid- to long-term.”

“The government has come up with various ideas for the future that could hopefully aid the survival of the shipbuilders,” a spokesperson from SHI said. “The 11 trillion won worth of orders will help small and midsize shipbuilders and also those major shipbuilders who build defense ships.”

However, whether the plan will work is still in question. “The plan is still quite vague as to how much the companies would actually gain through each inked order since orders haven’t been fixed,” an HHI spokesperson said.

The Ministry of Trade, Industry and Energy also came up with plans to spend 3.7 trillion won in five regions that are home to the shipbuilding industry, such as Ulsan and Geoje in South Gyeongsang.

The government will focus on finding new industries for such regions.

“We expect the financial package will lower the reliance on the shipbuilding industry in the five regional economies from 65 percent in 2014 to 43 percent in 2025,” said an official at the Trade Ministry.

For shippers, the government announced 6.5 trillion won worth in financial support, including a program to help shippers secure new ships.

A government fund supporting new shipbuilding orders will be doubled from $1.2 billion to $2.4 billion and the range of ships subject to support will be expanded from large container ships to bulk vessels and tankers.