A government report released Monday showed the Korea economy continues to be sluggish, particularly after Samsung Electronics discontinued its Galaxy Note7, which affected both domestic consumption and industrial output in September.

Industrial output fell 0.8 percent in September compared to the previous month and domestic consumption fell 4.5 percent, Statistics Korea said Monday. Industrial output fell for the first time since April, when it fell 0.7 percent compared to the previous month. The drop in September was the biggest since January’s 1.4 percent fall.

Industrial output in mining and manufacturing increased 0.3 percent in September from a month earlier, while output in the construction and services sectors fell 4.7 percent and 0.6 percent each. 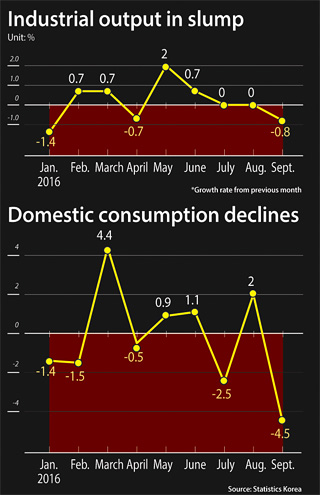 “Domestic economic figures such as consumption and investments have weakened largely due to the Galaxy Note7 problem, but we believe that the figure for October will improve compared to September,” said Joo Hwan-wook, a director at the Ministry of Strategy and Finance.

Sales of telecommunication products like smartphones dropped 11.6 percent from a month earlier and those of home appliances like air conditioners dropped 12.6 percent during the same period.

Even though consumption remained weak in September, the government expressed confidence that it will recover in October.

“Preliminary sales data from department stores and discount chains showed signs of improvement in October, and the government believes that consumption will continue to improve and that the anti-graft law that went into effect recently has limited effects,” said Joo at the Finance Ministry.

“The government will proceed with its 10 trillion won [$8.7 billion] financial stimulus package to boost the domestic economy and will monitor various factors that might have negative impacts on the economy, such as household debt and the real-estate market, to reduce uncertainties in advance.”

According to the Finance Ministry, sales at department stores rose 2 percent year-on-year from Oct. 1 through Oct. 26, and the figure for large discount chains increased nearly 4 percent during the same period.