Stuntman suing actor after being run over on set

Stuntman suing actor after being run over on set 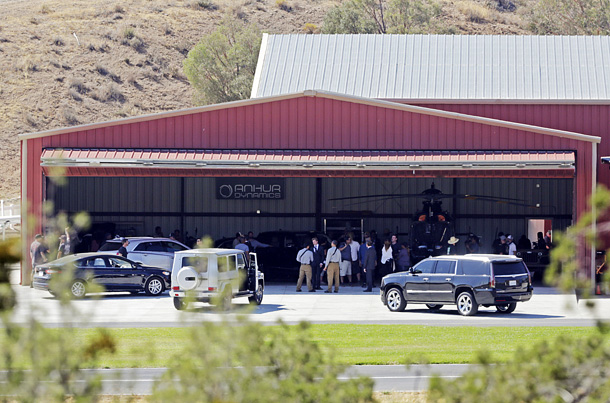 Members of a film crew stand at Agua Dulce Airpark, a small, rural airport in Agua Dulce, Calif., in northern Los Angeles County on Wednesday, July 6, 2016. Steve de Castro, a stuntman who was injured in when he was run over by Tom Sizemore while filming the upcoming television series “Shooter” at the site on July 6 has sued the actor and Paramount Pictures over the accident in Los Angeles Superior Court on Friday. [AP/NEWSIS]

LOS ANGELES - A stuntman who was injured when he was run over while filming USA’s television series “Shooter” is suing actor Tom Sizemore and the production.

Steve de Castro sued Sizemore and Paramount Pictures on Friday, claiming the July incident in which he was pinned beneath a sport utility vehicle driven by Sizemore left him with significant injuries.

The lawsuit claims the Black Hawk Down actor was intoxicated at a remote desert airport in northern Los Angeles County during filming of the upcoming USA Network action show “Shooter.” De Castro was airlifted from the scene but the lawsuit does not specify what his injuries were, describing them only as “numerous internal and external injuries.”

Paramount declined to comment on the lawsuit. Sizemore’s agents did not return emails sent Saturday.

De Castro’s lawsuit states that some of his injuries are likely to be permanent and they have hampered his ability to work.

Sizemore was arrested later in July on suspicion of domestic violence and has pleaded not guilty to being abusive to his ex-girlfriend.

The accident and criminal case occurred amid Sizemore’s latest comeback attempt after years of substance abuse problems. He has a recurring role in “Shooter,” but his career has fallen from its heyday when he appeared in such films such as Saving Private Ryan and Black Hawk Down.

“Shooter,” which was set to debut in July, had its premiere moved back to Nov. 15 following the police-involved shooting in Baton Rouge, La. The show is based on the 2007 film starring Mark Wahlberg and the novel that inspired it, Stephen Hunter’s “Point of Impact.”AP