Bringing a lively discourse to public spaces: Director Baume of the Public Art Fund in New York says that public art is an expression of a thriving democracy

Bringing a lively discourse to public spaces: Director Baume of the Public Art Fund in New York says that public art is an expression of a thriving democracy 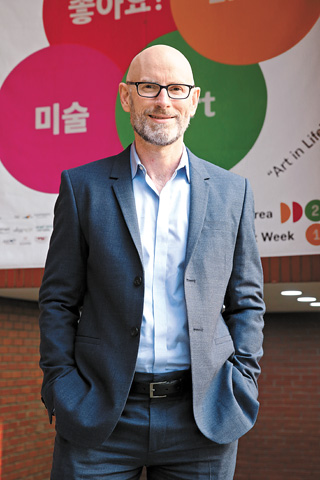 As a country with many large sculptures built in the last few decades, many Korean provincial governments and institutions seem to often take permanent monuments for public art.

On the other hand, all the projects of the Public Art Fund, which has organized artists’ projects and exhibitions in public spaces throughout New York City for the last four decades, are temporary.

“I recommend fewer monuments and more temporary public art programs so that artists can be more experimental,” said Nicholas Baume, who has been director and chief curator of the Public Art Fund since 2009. He met a group of Korean journalists at the Arts Council Korea in central Seoul during his first-ever visit to the Korean capital city at the invitation of the council last month.

“Sometimes the artists can fail and then the works go away and we replace them with new projects, as they are all temporary,” he added. “This is lively civic discourse.”

Among the recent exhibitions curated by Baume was that of the large-scale sculpture “Van Gogh’s Ear” which stood at the entrance to the Channel Gardens at Rockefeller Center from mid April to mid August. Fascinated by the playful sculpture, New Yorkers and tourists took and uploaded thousands of photos on social media.

Created by artist duo Elmgreen & Dragset, the cyan-blue sculpture took the form of a swimming pool sitting upright, which would remind art lovers of Marcel Duchamp’s anti-art but, at the same time, had the title “Van Gogh’s Ear,” which was related not only with the sculpture’s shape but also with the archetypal myth about a tormented great artist.

Despite its popularity, the exhibition wrapped up in mid August. “All of our projects are temporary,” Baume emphasized. He said it helps when the projects faces public opposition.

“Even if you hate a project that we do, you know it’s not going to be there beyond the season of a few months, so you can live with it.” 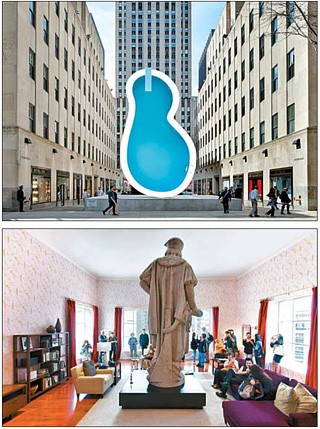 The fund’s 2012 project, “Discovering Columbus” by Japanese artist Tatzu Nishi was one of the projects that caused some controversy. Nishi, known for works that transform our experience of monuments, moved the huge historic statue of Christopher Columbus erected in 1892 from its original position atop a 75-feet column and put it in a new context of a fully furnished, modern living room.

“A small group in the Italian-American community opposed the project, although most people in the community supported it,” Baume said. “This kind of objection is inevitable if we work in spaces that people share and feel are theirs. In this case, the majority of people were in favor of the project and we believed strongly in what we were doing, so the opposition didn’t derail the project.”

“Ultimately, the project was a brilliant success and the controversy really just made everybody aware of the project because the press loves controversy,” he added, smiling.

Showing that media outlets including the New York Times and Fox TV covered the project and the controversy, Baume said, “Whereas most contemporary art has very specific media exposure, public art has the opportunity to really engage a whole city.”

He emphasized both the artists’ and public art organizers’ and the public’s open-mindedness and willingness to communicate for the success of a public art project.

“To have a good public art program you have to have a thriving democratic spirit. You have to believe in individual expressions because it is one artist’s ideas. You have to be open enough as a society to celebrate the difference of individual perspectives,” he said.

“Of course at the same time, I must be sensitive and respectful to people who also feel a strong sense of ownership.”

“In my experience, good art and popular art are not mutually exclusive,” he added. “In fact, mostly it’s true that if a work of art doesn’t speak to a broad audience, it’s not going to thrive and live on. Public art has to invite people to connect. Public interest is something that must be nurtured and fostered.”

Asked about public art’s difference from monuments and decorations, he smiled and said, “The biggest insult you can give to an artist is to say ‘Your work is decoration’ or ‘you are making monuments.’”

“That’s why I said before that the best context for public art is a thriving democracy that believes in individual expression. So, I recommend fewer monuments and more temporary public art programs.”