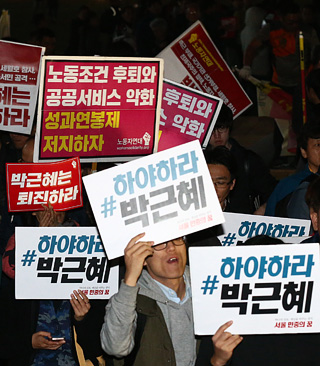 As the Choi Soon-sil and Park Geun-hye connection put the entire nation in shock, all outside writers sent their contributions for our newspaper after the deadline. Two psychiatrists who never fail to meet deadline were no exception. The scandal put all of us in a panic and we all find it hard to concentrate on work. But the psychiatrists seem to be asked myriad questions about the mental state of the president. Even the experts are just as surprised, frustrated and angry at the president as everyone else.

The appearance of Choi Soon-sil is the last piece of the puzzle that we all found hard to understand. At the same time, there is something we cannot comprehend: how composed the president is. After the short, two-minute apology, the public is outraged and Park’s approval rating is plummeting. But the president is going on with her schedule as if nothing happened.

Of course, she ordered the Blue House senior staff to resign and met with the ruling Saenuri Party advisers to handle the political turmoil. But we don’t remember her trying to persuade enraged citizens.

What does her peaceful silence mean?

Eighteenth-century French preacher Joseph Antoine Toussaint Dinouart wrote in “The Art of Silence” that people should open their mouths only when they have something better to say than staying quiet. It would be nice if the president’s silence can be interpreted as a sign of prudence, but the public is skeptical.

The book warns of a few kinds of silence we should be wary of, and one of them is the “silence of indifference.” One can stay silent to those waiting for a response only when she has little regard for them. Simone de Beauvoir wrote in her 1944 philosophical essay “Pyrrhus et Cinéas” that all words and expressions are pleas to the other, and silence is a true form of contempt. By being silent, one gets rid of refutation and anger and doesn’t mind being an object of ridicule or hatred.

Hopefully, the president’s silence is not an outcome of disregard or contempt toward the people. We’d rather think she is too feeble-minded to speak. But many people feel differently.

In fact, there were some people to whom the president should have showed disregard. They are the one who flatter the president, take personal interests and brought the nation into chaos while claiming to be devoted to the president. President Park should choose whom she must ignore and to whom to be silent. That’s the least amount of courtesy she can show to the citizens whom she has fooled all along.