Hyundai revs up its plan for ‘connected cars’

Hyundai revs up its plan for ‘connected cars’ 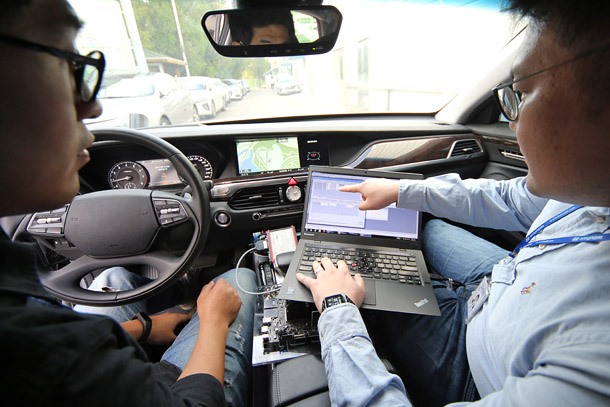 Hyundai Motor Group took a closer step toward merging IT with automobiles in a move it says will ultimately lead to fully autonomous vehicles.

The nation’s No. 1 automaker said Monday it is developing an independent platform called Connected Car Operating System (ccOS) which is expected to advance how vehicles communicate with their internal and external environments.

The ccOS-installed vehicles are set to be available in 2020 under the concept “Hyper-connected & Intelligent Car.”

Hyundai Motor and its smaller affiliate Kia Motors said ccOS uses a similar concept to PC’s Windows or smartphones’ Android or iOS. In other words, ccOS will critically determine how the vehicles process a massive amount of data transmitted to the car and how the drivers experience it while driving.

For example, the new OS will accelerate digitization and sharing of data from internal auto parts such as engine and gears, helping the maintenance and engineering of the vehicle. It will also deliver external information including pedestrians, bypassing cars or other objects surrounding the vehicle.

The infotainment aspects, including functions related to navigation, multimedia and connectivity to diverse smart gadgets will be enhanced too.

“Hyundai Motor and Kia Motors are striving to establish their own software platform in order to be an industry leader in the connected car industry in the future,” a company spokesperson said. “Based on this platform, the group is going to develop diverse high-connected car technology.”

Hyundai Motor Group’s effort to develop connected car technology has been in development since April, when it announced its partnership with global solution provider Cisco to strengthen the IT aspect of its vehicles.

“Developing a high-performing computer that runs on roads” was Hyundai’s goal at the time. “Connecting the car with other cars, house, office and even the city” was what Hyundai said it will achieve in the future.

As part of its plans, Hyundai established a department solely dedicated to developing ccOS in its Namyang Research & Development Center in June. It is also developing what’s called Reference Platform, which will provide regulations and standards on commercializing ccOS.

Connecting automobiles with network serviced is one of the most coveted industry sectors, which both IT and auto companies are fiercely focusing on. Market watcher BI Intelligence recently said that of the 92 million vehicles manufactured in 2020, 75 percent of them will be connected cars wired to networking services.

Renault Nissan Alliance also revealed a new partnership with Microsoft to build a cloud-based service for cars in September. It said the technology will debut by 2020.

Samsung Electronics has already jumped into the burgeoning market by unveiling its autonomous Connect Auto solution in February at the Mobile World Congress.