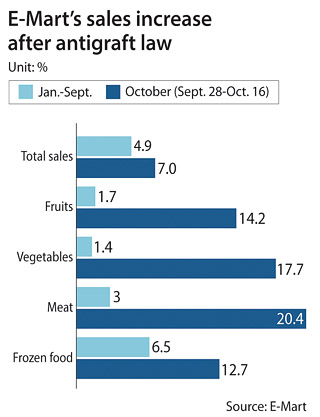 One month after the implementation of the antigraft law better known as Kim Young-ran act, major retailers weren’t hit as hard as initially expected according to recent sales data.

Retail companies that sell groceries, such as discount chains and convenience stores, posted positive results during October. The Kim Young-ran Act, which limits the cost of gifts and meals among meetings involving public officials and journalists, took effect Sept. 28.

Industry insiders said the Korea Sale Festa was responsible for the uplift, in which domestic retail companies held sales between late September and early October. The Kim Young-ran Act, which sent office workers home for dinner instead of to restaurants, and the surge of solo eaters and drinkers seem to have boosted the consumption of fresh food and ready-to-eat products.

E-Mart, the nation’s leading discount chain, posted growth of 7 percent between Sept. 28 and Oct. 16. This is higher than the average growth rate of 4.9 percent between January and September.

By sector, the sharpest growth was noticed from fresh foods, which rose 13.5 percent. Until September, the average monthly growth rate was 1.1 percent. Sales of fruits and vegetables, which each posted 1 percent increases in September, jumped to 14.2 percent and 17.7 percent in October.

The uplift in fresh food is suspected to have been influenced by the increase of people cooking at home after the new law. Frozen foods also increased, growing 12.7 percent.

Lotte Mart reported that its October sales grew 4.6 percent, up compared to a 0.6 percent growth between January and September. Fresh food sales rose 6 percent and instant food rose 4.6 percent. “The company is viewing October numbers as favorable, considering the discount chain market wasn’t that rosy this year,” said a company spokesman. “We even had months when the growth rate went below zero.”

Meanwhile, convenience stores saw growth amid the changes and a continuous uptick in single-person households, which are 27.2 percent of the population, according to last year’s report from Statistics Korea.

Dosiraks, or single-portion boxed meals, rose 239.9 percent in sales year-on-year, up from the 196.1 average increase between January and September. Frozen food rose 45.3 percent year-on-year, led by ready-made rice bowls with toppings, which showed the sharpest uplift at 199.9 percent.