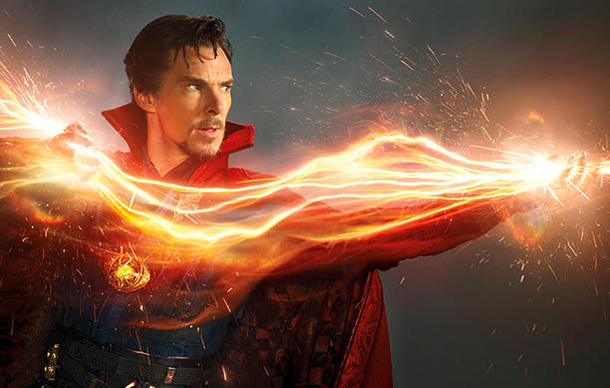 Marvel’s new superhero movie “Doctor Strange” ruled the local box office over the weekend, according to the Korean Film Council on Monday.

Directed by Scott Derrickson and starring Benedict Cumberbatch as a skilled yet cocky surgeon, the film unfolds as the surgeon gets into a car accident that permanently leaves him with unsteady hands. Feeling devastated, he heads to Kathmandu’s ancient temples in search of spiritual enlightenment. There he finds his spiritual mentor, the Ancient One, (Tilda Swinton) and realizes his special powers that allow him to fight off villains that try to break the laws of nature.

The action-comedy “Luck-Key” slipped to the second spot in its third week after dominating the box office for two weeks, selling 713,000 tickets over the weekend. Since the film was released on Oct. 13, over 5.6 million tickets have been sold.

Another local movie, “Hide-and-Never Seek,” came in at third place, selling a total of 182,000 tickets since its release on Wednesday. The horror film depicts the dangerous and heart-trembling journey of an online video streaming service’s show host (Ryu Deok-hwan) and his program’s producer Jo Bok-rae.

With 56,300 tickets sold, “Inferno,” filmmaker Ron Howard’s third installment in “The Da Vinci Code” series starring actor Tom Hanks, dropped to the fourth spot from last week’s second, with an accumulated 624,000 tickets sold. Since its release locally on Oct. 19, the movie hasn’t been able to capture many moviegoers’ hearts.

The animated “Kubo and the Two Strings,” and the documentary “Moo-hyun, the Story of Two Cities” which depicts the life of late President Roh Moo-hyun followed respectively.

Another documentary, “Spy Nation,” directed by a journalist Choi Seung-ho, which takes a look in the fabrication of espionage charges by the National Intelligence Service (NIS), came in ninth. The tenth spot went to “Queen of Walking,” which stars Shim Eun-kyung.