Choi is finally forced to explain her influence

Choi is finally forced to explain her influence 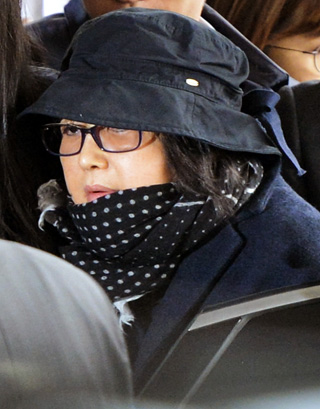 Choi Soon-sil, the central figure in a snowballing scandal that has threatened the survival of the Park Geun-hye administration, enters the Seoul Central District Prosecutors’ Office at 3 p.m. Monday for questioning nearly 31 hours after she returned to Korea. [KIM KYUNG-ROK]

Choi Soon-sil, the controversial friend of the president suspected of pulling strings from behind the scenes, appeared for questioning at the Seoul Central District Prosecutors’ Office on Monday, nearly 31 hours after she returned to Korea from abroad.

Her whereabouts and activities during those 31 hours are a mystery.

The 60-year-old Choi, the key figure in a snowballing scandal threatening the survival of the Park Geun-hye administration, showed up at the prosecutors’ office at 3 p.m. clad in a black-colored hat, coat and scarf. Hundreds of reporters and civic activists waving picket signs that read “Out with Park Geun-hye!” were waiting for her.

“Please forgive me. I apologize to the people,” Choi said while weeping before throngs of reporters. “I committed a sin that deserves death.”

Choi was seriously jostled by the crowd on her way in for several minutes and seemed shaken. She lost one of her Prada shoes in the melee.

The fact that Choi was allowed to roam free for 31 hours after landing at Incheon International Airport Sunday morning has outraged both political players and the public, who suspect that authorities were giving her time to collude with other suspects in the scandal to prepare a defense and possibly dispose of evidence.

The opposition lashed out, saying the prosecutors’ lenience was unprecedented for a central figure in such a high-profile scandal.

Lee Kyung-jae, Choi’s defense lawyer, refuted suspicions that Choi might have tried to destroy evidence during the 31-hour-gap.

“I am aware of suspicions about evidence being destroyed, but it’s not possible,” Lee told reporters as he followed Choi into the prosecutors’ office.

The former prosecutor said Choi has been taking medication for a panic disorder. Her daughter Chung Yoo-ra, herself embroiled in a controversy over her admission to Ewha Womans University, would not return to Korea for some time, he said.

The controversy revolves around the extent of the influence Choi had in the Park administration. President Park admitted Tuesday that she sought help from Choi in writing speeches before and after she became president. According to an exclusive report by broadcaster JTBC a day before, more than 200 files, including presidential speeches, drafts for cabinet meeting remarks and overseas trip itineraries - all classified - were found on a tablet computer thought to have been owned by Choi. Also found were some selfies of Choi. Experts said the selfies were taken on the device and not sent from another device.

Prosecutors could indict her with more charges if they confirm that she was pulling strings from behind the scenes in state affairs since Park took office in February 2013.

Prosecutors on Monday banned two former presidential secretaries, Jeong Ho-seong and An Chong-bum, from leaving the country. The move came a day after their resignations were accepted by Park. An, former senior secretary for policy coordination, is suspected of strong-arming conglomerates to make contributions worth 77.4 billion won ($67.6 million) in total to two nonprofit foundations, Mi-R and K-Sports, on behalf of Choi. The Mi-R Foundation received 48.6 billion won in donations from 19 conglomerates within two days of its launch last October; the K-Sports Foundation raised 28.8 billion won within six days of its launch in January.

Jeong, nicknamed one of the “three doorknobs to the president” for his access to Park, faces accusations that he reported state affairs to Choi with classified material.

Ko, an executive at Blue K, a shell company set up in Korea and Germany, said he had told prosecutors everything he knows about Choi.

Blue K is suspected to have been used to siphon off funds from the two foundations. JTBC quoted Ko as saying on Oct. 20 that Choi’s favorite habit was editing Park’s speeches.