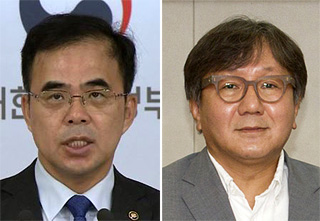 Korea’s cultural world has been swept into the scandal around presidential friend Choi Soon-sil, who managed to place some of her confidants in top cultural posts.

As the media connects the dots and follows the money, one after another of those figures is resigning.

Song Sung-gak, president and CEO of the Korea Creative Content Agency, is the latest: He resigned on Monday. KOCCA’s publicity department sent a brief text message to reporters saying Song resigned “so as not to give burden to the employees of KOCCA and the culture ministry in carrying out their duties.”

KOCCA is one of the organizations that operate under the Ministry of Culture, Sports and Tourism. In fact, the two highly controversial organizations that were the earliest center of the Choi scandal - the Mi-R Foundation and the K-Sports Foundation - were established with the approval of the culture ministry.

Song is reportedly a close friend of Cha Eun-taek, a director of TV commercials, who is a confidant of Choi Soon-sil and de-facto head of the Mi-R Foundation.

Insiders say Song, who has been in the advertising industry for a long time, chose Cha in 2005 to direct the Samsung Anycall commercials that catapulted Cha to success in the industry.

Four months after Cha became a member of the Presidential Committee for Cultural Enrichment in August 2014, Song became the head of KOCCA. Since then Song is known to have wielded vast power in the ad industry, landing a lucrative project for his former ad agency.

Kim Chong, second vice minister of culture, sports and tourism, submitted his resignation on Sunday. Kim is believed have benefitted from the two foundations and lobbied for preferential treatment in the hiring of associates.

Insiders in the culture ministry said Kim Chong’s appointment in 2013 as second vice minister “was a surprise.”

After culture minister Yoo Jin-ryong was abruptly dismissed in 2014, a reshuffle took place in the ministry so that major tasks and budget decisions could be directed by Kim.

It is now apparent that Cha Eun-taek - or his confidants - have been behind almost every high-profile cultural event in the country during the Park administration.

In August, 2014, President Park watched the ministry-backed musical “One Day,” and gave it a rave review. The musical was directed by Cha and got a last minute supplementary budget of 178.9 million won ($156,000) six days before it premiered. Sources told a Korean daily that the order for the money came “from above last minute.”

Kim Young-seok, the hanbok designer who has designed traditional Korean outfits for Park, also has connections with Choi. Kim, who served as a director of the Mi-R Foundation, showcased his hanbok designs at an exhibition at the Blue House in October.

Kim also designed the highly controversial, huge bokjumeoni (lucky bag) installation set up in Gwanghwamun Square on the day Park was inaugurated in 2013.

As these revelations continued to be reported by the media, the culture ministry released a vague statement Monday saying Culture Minister Cho Yoon-sun organized a high-official meeting to discuss where the ministry stands now and where it’s heading.

“As various suspicions arise regarding projects of the culture ministry, [we] are examining the legality and [partiality] of projects that are suspected of influence-peddling from outside,” it said, without citing any specific projects.

One of President Park’s key policy directives was “enriching people’s lives with culture.” This initiative was branded “Flourishing Culture.” There have been many cases of suspicious personnel management in Korea’s culture sector in recent years.

Many top government posts in the cultural arena were vacant for a long time. There have been several abrupt resignations.