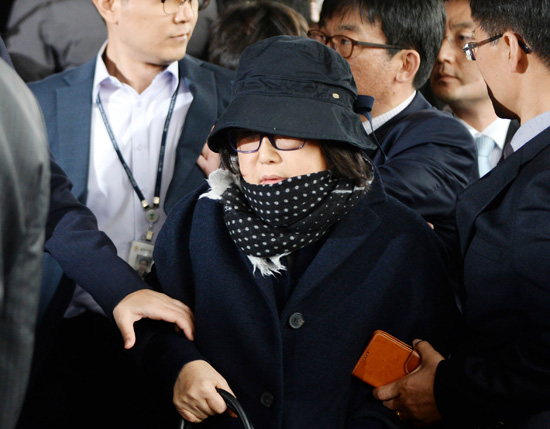 Choi Soon-sil, the key figure in a snowballing scandal that has threatened the survival of the Park Geun-hye government, enters the Seoul Central District Prosecutors¡¯ Office at 3 p.m. Monday for questioning, nearly 31 hours after she returned to Korea.[ NEWSIS]

Choi Soon-sil, the controversial friend of the president suspected of pulling strings in state affairs from behind the scenes, appeared for questioning at the Seoul Central District Prosecutors’ Office on Monday, nearly 31 hours after she returned to Korea from abroad.

Her whereabouts and activities during those 31 hours are a mystery.

The 60-year-old Choi, the key figure in a snowballing scandal threatening the survival of the Park Geun-hye administration, showed up at the prosecution office at 3 p.m. clad in a black-colored hat, coat and scarf. Hundreds of reporters and civic activists waving picket signs that read “Out with Park Geun-hye!” were waiting for her.

“Please forgive me. I apologize to the people,” Choi said while weeping before throngs of reporters. “I committed a crime so grave that I should die.”

Choi was seriously jostled by the crowd on her way in for several minutes and seemed shaken. She lost one of her Prada shoes in the melee.

The fact that Choi was allowed to roam free for 31 hours after landing at Incheon International Airport Sunday morning has outraged both political players and the public, who suspect that authorities were giving her time to collude with other suspects in the scandal to prepare a legal defense and possibly dispose of evidence. The opposition lashed out, saying the prosecutors’ lenience was unprecedented for a central figure in such a high-profile scandal.

Lee Kyung-jae, Choi’s defense lawyer, refuted suspicions that Choi might have tried to destroy evidence during the 31-hour-gap. “I am aware of suspicions about evidence being destroyed, but it’s not possible,” Lee told reporters as he followed Choi into the prosecutors’ office.

Prosecutors could indict her with more charges if they confirm that she was pulling strings from behind the scenes in state affairs since Park took office in February 2013.