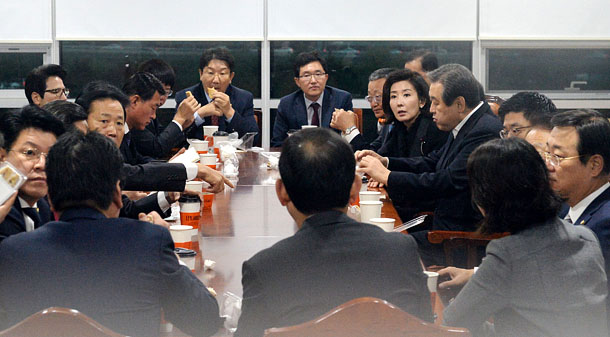 Saenuri lawmakers who are not members of the pro-Park faction meet in the National Assembly in Yeouido, Seoul, on Monday to discuss Choi-gate. [NEWSIS]

Senior lawmakers of the ruling party on Monday pressured their leader, Chairman Lee Jung-hyun, to resign for his failure to check the Blue House over the scandal involving President Park Geun-hye’s friend and her abuse of power.

Dozens of Saenuri Party lawmakers started a group action as Lee, a key associate of President Park, resisted the growing clamor to step down over a growing scandal threatening Park’s presidency involving allegations that Choi Soon-sil, a longtime friend of the president, has been controlling state affairs from behind the scenes.

About 40 lawmakers met in the morning and discussed the party’s response to the scandal. As Park reshuffled the Blue House secretariat and is considering an overhaul of the Cabinet, the ruling party must also change, they said, demanding the resignation of the entire Supreme Council.

Lee, often referred to as Park’s mouthpiece, was elected chairman in August. After Park took office in 2013, he served as her senior political secretary and senior public affairs secretary. The nine-member Supreme Council of the Saenuri Party, elected in August, is largely dominated by Park loyalists. Rep. Kang Seok-ho is the only Park adversary elected to the council.

The emergency meeting in the morning was attended by high-profile politicians who are not loyal to Park. In addition to Kang, Reps. Choung Byoung-gug, Na Kyung-won, Kim Yong-tae, Joo Ho-young and Kweon Seong-dong attended the conference. Rep. Shim Jae-cheol, vice speaker of the National Assembly, and Rep. Kim Moo-sung, former chairman of the party, also attended.

“The party must take action to convince the public that it is completely reborn,” former Chairman Kim said, demanding Lee’s resignation. He also criticized the current leadership for having failed to grasp the situation.

Following the meeting, Rep. Kang attended the Supreme Council meeting and confronted Lee. “Unless the party reforms itself, along with the Blue House and the administration, we won’t be able to restore public support,” he said, stressing that the entire leadership, including himself, must resign to set an example.

Separately from the meeting, a group of 21 lawmakers signed a statement to demand Lee’s resignation. “The leaders who failed to prevent the current crisis and only tried to please the Blue House must take responsibility and resign,” the statement said. “A bipartisan cabinet supported by the opposition parties and the people must be created to cope with the crisis.”

Rep. Hwang Young-cheul said 54 lawmakers so far showed their support for forcing Lee out. He also said President Park must submit to the investigation, but Lee did not budge. “Resigning and running away in the face of hardship is the easiest choice,” he said after the Supreme Council meeting, adding that he will continue to operate as “captain of the ship.”

In protest of the leadership, Rep. Kim Hyun-ah tendered her resignation as the party’s spokeswoman. Rep. Oh Shin-hwan also resigned as public affairs chief and Rep. Kim Jong-seok resigned from his position as the director of the party’s think tank, Youido Institute. Lee said he decided to accept their resignations, adding that further resignations of party officials will also be accepted.

Meanwhile, a meeting held to address the current crisis by the three major parties’ floor leaders, hosted by the National Assembly speaker Chung Sye-kyun, broke down. Rep. Chung Jin-suk, floor leader of the Saenuri Party, condemned the main opposition Minjoo Party of Korea for having recanted its proposal to appoint a bipartisan prime minister to minimize the administrative vacuum and then stormed out of the conference room.

“We decided yesterday to accept the opposition’s proposal and recommended it to the president,” Chung said. “It was a patriotic decision to stabilize the country by allowing a neutral prime minister, supported by both the ruling and opposition parties, to run the cabinet.

Rep. Woo Sang-ho, floor leader of the Minjoo Party, expressed his displeasure. “This is why you ended up in failure,” he said. “You didn’t come here to talk, but to attack.”

Although the proposal of appointing a bipartisan prime minister was first proposed by Moon Jae-in, former chairman of the Minjoo Party and its presidential frontrunner, the opposition parties are increasingly attaching preconditions after the Saenuri Party’s acceptance. They want an investigation by an independent council and for Park to surrender her party membership before the bipartisan cabinet is formed.