Jeonbuk fires up its engines, Lee and Kim, for the finals

Jeonbuk fires up its engines, Lee and Kim, for the finals 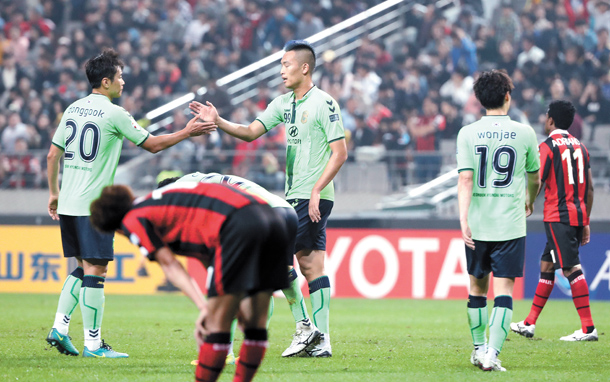 Jeonbuk Hyundai Motors’ Lee Dong-gook, left, celebrates their win over FC Seoul in the semifinals of this year’s ACL with his teammate Kim Shin-wook on Oct. 19. Lee and Kim are the engines of Jeonbuk’s offense this year. [ILGAN SPORTS]

Lee Dong-gook and Kim Shin-wook, the twin engines of Jeonbuk Hyundai Motors’ offense, are 10 years apart in terms of age but have something in common these days; butterflies in their stomachs for the upcoming Asian Champions League (ACL) finals. But while their faces betray a hint of nervousness, their determination to win a championship trophy overshadows any agitation.

Jeonbuk defeated their rivals FC Seoul in the semifinals of this year’s ACL 5-3 on aggregate. As a result, Korea’s elite K-League club will face Al Ain of the United Arab Emirates in the AFC Champions League final later this month. The squad looked more stern than elated after their final berth was secured. Choi Kang-hee, the skipper of Jeonbuk, said, “We still feel the pain of five years ago. These are painful memories and we are delighted to have the chance to play in another final.”

“Frankly, I do not want to think about that night,” said Lee, who was reluctant to discuss about what happened five years ago. “What a painful memory. All I have to say is that we should not repeat the same mistake.” It was clear that although five years have passed, the pain has not subsided for Lee.

In the ACL five years ago, Lee piled in nine goals and became the top scorer of the tournament. His dominant plays on the pitch earned him the MVP award of the tourney, as well. But in the final against Al-Sadd of Qatar, which was played in a single match then, Jeonbuk lost after the match that dragged into a penalty shootout.

“A single-match system put a lot of pressure on us,” said Lee. “But now we play in a two-legged format so I think we have some room to approach each match with more caution. We have to really prepare ourselves well.”

And Lee is far from being naive about the coming matches. “They [Al-Sadd] have what it takes to be in the finals,” Lee said. “It will not be easy to take the pace of the match for ourselves. Essentially, we have to minimize our losses and maximize our goals.”

Five years ago, the 32-year-old Lee, now 37, was at the pinnacle of his career, which means the ACL finals this year could be his last. “I might not get this chance ever again,” said Lee. “It is time now to make up for the loss [five years ago].”

Kim wasn’t there with Jeonbuk five years ago, but nonetheless, he wants to win the trophy as much as anyone on the squad.

Kim once tasted the sweetness of ACL victory in 2012 when he led Ulsan Hyundai FC to top the competition. He then left his Ulsan club and joined Jeonbuk over the transfer window before this season. Donning the green now, the 1.97-meter (six feet five inch) forward is thrilled to be back in the finals once more, but the pressure of shooting for the top isn’t something one gets used to.

Although the terms of conditions of Kim’s contract with Jeonbuk are unknown, it was reported that Jeonbuk spent more than two billion won to bring the lanky forward onto their roster. Despite the hype, the 27-year-old struggled early in the season. “I heard Jeonbuk paid a lot for my transfer fee,” Kim said. “I have to play well, don’t I? In retrospect, when I played in a tournament, I rarely lost. I think the result will be the same this time.”

And Kim is a believer of this year’s team. “I think our team boasts better members than five years ago,” Kim ex-plained. “Also, we are enjoying playing football right now. I think we will enjoy the rest of the competitions from here on out.”

The first-leg match of the finals is slated for Nov. 19, and Jeonbuk will host Al-Sadd on their home turf, Jeonju World Cup Stadium in North Jeolla.