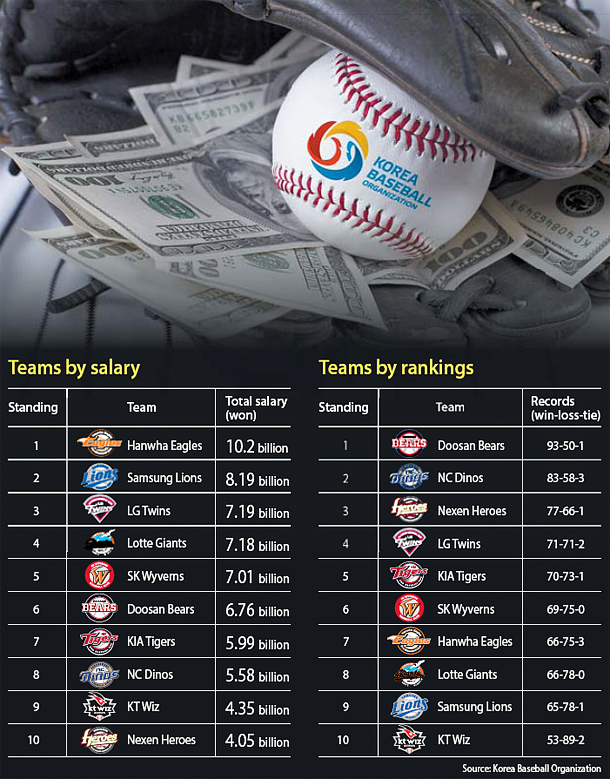 The common law of business balance says one cannot pay less and get more, but in baseball, it might just be true. This year’s Korean Series is a duel between the Doosan Bears and the NC Dinos, and yet it may surprise some to learn both teams are ranked near the bottom when it comes to what they pay their players.

The Bears, who won the pennant race this year with a record of 93-50-1 (win-loss-tie), are ranked sixth in terms of salaries paid to their players, spending 6.76 billion won ($5.92 million) this season. The challengers, the Dinos, are ranked eighth, pouring in 5.58 billion won this year to form the strong-batting lineup for which they have been known this season.

In comparison, the Hanwha Eagles, Samsung Lions, Lotte Giants and SK Wyverns, who are ranked within the top-five in terms of salary with the fifth-place Wyverns spending 7.01 billion won, have finished the regular season at the bottom and failed to qualify for the postseason. The LG Twins, ranked third in terms of salaries, is the only team in the top bracket to make it into the playoffs. Essentially, those who spent more than seven billion won this year saw returns far worse than their expectations.

The 10.2 billion won that the Eagles paid their players set a KBO milestone, as it was the first time that a team spent more than 10 billion won in salaries alone since the birth of the league. The average amount of salary for the squad was also the league’s highest at 179 million won. Kim Tae-kyun, the first baseman of the Eagles, received the highest salary in the league, boasting a 1.6 billion won price tag this year.

Regardless, the Eagles finished the season seventh, struggling near the bottom throughout and once again failing to make it into the postseason for the ninth consecutive year.

By comparison, the Nexen Heroes, ranked 10th in terms of paychecks, were the quintessential example of low-cost and high-efficiency this season. Following the departure of key players such as Park Byung-ho to the Minnesota Twins of the Major League, the expectation was that the Heroes would sink to the bottom of the pool. Instead, thanks to the team’s greenhorns, the Heroes finished the regular season in third.

And the story of low-paid underdogs rising to the top isn’t limited to the Korean league. In Japan, the Yokohama DeNA BayStars spent 1.9 billion yen ($18.1 million) this year, the least among the teams in Nippon Professional Baseball (NPB), yet they managed to finish the season third in the Central League and went all the way to the final stage of the Climax Series, the playoff series in Japan before the Japan Series. They even knocked out the Yomiuri Giants, one of the richest and best-sponsored teams in the NPB, in the first series of the postseason. The Japan Series this year was a matchup between the Hokkaido Nippon-Ham Fighters and Hiroshima Toyo Carp, ranked seventh and eighth in payroll. The Fighters claimed the series over the Carp by 4-2.

The Major League is also seeing a similar trend. The Cleveland Indians, this year’s American League champs, are ranked 22nd among 30 MLB clubs in terms of salaries, spending $114.7 million total this year. They have made it into the World Series for the first time since 1948.

All in all, the three leagues have one thing in common. Those who spent their money efficiently are seeing success. In other words, highly-paid players don’t always give the best performances. With different means to measure a player’s value at the team’s disposal, it is no longer the case that whoever spends the most amount of money gains the best outcome. The Los Angeles Dodgers and the New York Yankees, who pay $43.6 million and $21.6 million as luxury taxes, a surcharge on the team’s aggregate payroll to the extent to which it exceeds a predetermined standard set by the league, are the exemplary cases. The Dodgers haven’t made it into the World Series since 1988, nor have the Yankees since 2009.

“Big-spending clubs often go through a period of self-reflection when their investments do not generate decent outcomes,” said an industry insider. “Many times, low and efficient spending teams become their strategic models. This happens periodically in professional baseball.”