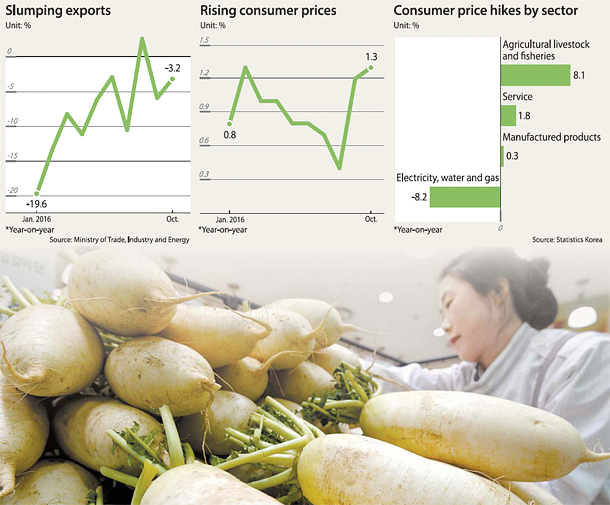 An employee displays white radish at a discount supermarket in Jung District, central Seoul, on Tuesday. Statistics Korea said that the price of fresh produce, including vegetables, rose significantly in October. [NEWSIS]

Korea posted lackluster trade numbers in October, adding to concerns that a combination of domestic headwinds involving the recall of Samsung Electronics’ Galaxy Note7 device and tepid demand abroad for Korean exports has left long-lasting effects on the nation’s economy.

The country’s exports fell once again in October, a result of on-and-off strikes in the automotive industry over wage negotiations that have hurt production since they began in July. According to the Ministry of Trade, Industry and Energy on Tuesday, exports fell 3.2 percent year on year to $41.9 billion in October.

This was the second straight month that year-on-year growth fell, after rising for the first time in 20 months back in August.

The ministry said that if cars and mobile devices were not included in the numbers, the export fall would have softened by 4.9 percentage points or $2.11 billion.

Exports to Vietnam rose for the ninth consecutive month, with the figure increasing 19.9 percent year on year last month.

Exports to Middle Eastern countries rose by 10 percent, whereas exports to the United States and Japan fell 10.3 percent and 1.7 percent each.

The government expressed concerns that the economy would not be able to improve immediately. “Global trade volume has decreased in general, and there are uncertainties such as the possible interest hike by the U.S. Federal Reserve and a weak telecommunications sector,” said Lee Min-woo, a director at the Trade Ministry.

Analysts were also pessimistic about the fourth-quarter outlook. “The government’s preliminary data showed that GDP growth in the third quarter of this year has improved compared to the previous quarter, but there are many factors that might have negative impacts in the fourth quarter, such as the Choi Soon-sil scandal,” said Yoon Chang-yong, an economist at Shinhan Investment.

“The government has limited options to boost the economy right now as their command system has weakened due to the Choi Soon-sil scandal, and the Bank of Korea will have a hard time lowering the interest rate at this moment, as the United States might increase their interest rate later this year.”

Even though the economy continues to be sluggish in Korea, other government data for October showed that consumer prices increased more than 1 percent compared to last year for a second straight month. According to Statistics Korea on Tuesday, inflation rose 1.3 percent last month, the biggest increase since February, when it also recorded 1.3 percent. The rate has remained below the 1 percent level from May to August, but it began to surpass the 1 percent level in September.

“Consumer prices rose mainly due to electricity bills, for which the government gave discounts just during the summer,” said Yoo Soo-young, a director at the Ministry of Strategy and Finance. “The government will closely monitor consumer prices that might give financial burden to people ahead of gimjang, Korea’s kimchi-making season.”

The consumer price of fresh produce, especially those used for making kimchi, rose 15.4 percent in October, and the figure rose by more than double digits for the second straight month.

The price of napa cabbage, a key ingredient for kimchi, jumped 143.6 percent compared to the previous year, and that of Korean beef, or hanwoo, rose 9 percent during the same period. The price of white radish rose 139.7 percent, and that of lettuce increased by 76.5 percent.

The price of soju sold in restaurants and bars rose 11.3 percent, and the price of pork increased 7 percent, according to Statistics Korea.

By region, consumer prices increased the most in Gwangju, Busan and Daegu, by 1.6 percent, followed by Seoul and South Jeolla, which recorded a 1.5 percent increase.

Meanwhile, Korea’s current account surplus, which is affected by broader factors such as financial transfers and factor income, widened to $8.26 billion in September from a $5.55 billion surplus in August, despite major export headwinds including the Galaxy Note7 recall and the labor strike at Hyundai Motor.

But the September figure marks a 21.3 percent decrease from the same month last year, when the surplus was $10.85 billion, according to preliminary data released by the Bank of Korea on Tuesday.

“We would not say that exports are really doing well,” a Bank of Korea official said. “But considering negative factors, including lower oil prices, the Galaxy Note7 recall and the Hyundai Motor strike, the result is better than expected.”

Still, performance in the services account was hit hard by the collapse of Hanjin Shipping, once the country’s largest container-shipping company, which recently went into bankruptcy protection.

The services account deficit surged 96.9 percent to $2.54 billion from the same month last year, the worst in five years and nine months.