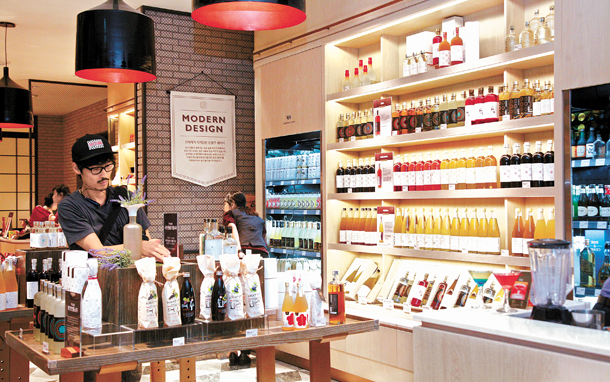 Traditional Korean liquors brewed by centuries-old fermentation methods have the air of stuffiness that one would expect from heritage drinks. Their strong herbal aromas and high alcohol content have appealed more to the elderly than young 20- to 30-somethings looking for lighter and more casual ways to savor their night.

But now, a younger generation is catching on to what their parents and grandparents have long enjoyed, and they are emerging as a new major consumer demographic for traditional Korean liquor.

At Shinsegae Department Store, customers in their 20s and 30s now account for more than 40 percent of purchases made at Woori Sul Bang, a store entirely dedicated to traditional Korean liquor at three of its branches in Myeong-dong, central Seoul; Banpo-dong, southern Seoul; and Busan. 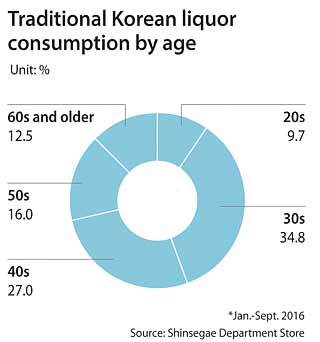 One well-known traditional liquor called munbaeju is made from wild pear. Hansan sogokju is made from sticky rice, and another drink called Songhwa baekilju is made from pine tree extracts. Their prices range from 30,000 won ($26) to over 50,000 won per bottle, and their alcohol content is higher than wine at over 18 percent.

“We intended the store to attract more younger customers with its sleek interiors and more contemporary labels and packaging,” an Woori Sul Bang spokesperson said, adding that changing the image of traditional liquor among younger drinkers was the focus. In fact, it was the out-of-style image and packaging of makgeolli that led to the quick decline of a makgeolli boom four years ago.

Woori Sul Bang was launched in 2013 in collaboration with the Korea Traditional Alcoholic Beverage Development Association to reinvigorate the market for traditional liquor. The store has a wide selection of over 45 traditional liquors from across the nation. The store’s name translates to “our alcohol room.”

Shinsegae says Woori Sul Bang has significantly enhanced the accessibility of traditional Korean liquor among the younger set. Previously, these types of alcohol were only sold in specialty bars or in rural areas where the liquor was actually being brewed.

“The products’ advancement in department stores has increased our sales over twofold,” said Kim Dong-kyo, the third-generation owner of a traditional liquor brewery in South Chungcheong. “Younger people especially, mesmerized by the sophisticated bottle design, are increasingly buying our products.”

Joining forces with bartenders, the event offered more than 60 types of traditional liquors either served straight or mixed into cocktails. The drinks included munbaeju, Hansan sogokju and Songhwa baekilju.

“I couldn’t help but frown when I tried to drink this liquor straight,” said one visitor surnamed Chung, who was getting a taste of munbaeju on Saturday. “But it was much better when mixed with cranberry juice.”

Indeed, cocktails sold much better than the liquor by itself, according to one bartender volunteering at the event. Mixing the strong bitters with sweeter soft drinks has been one strategy to captivate the younger set.

Kwanguyo, which produces Hwayo, a premium soju made from organic rice and distilled at a low temperature, has been rolling out diverse marketing strategies targeting consumers in their 20s and 30s.

In September, the distiller threw a party at the Gangnam night club Octagon, where cocktails containing Hwayo and fruit juice were sold as the main drinks.

“The popularity of Hwayo, especially at underground clubs and lounges, is so high these days that other beverage makers are asking us for collaborations in making mixed drinks,” a company spokesman said. “The flavor is said to be much better when compared with other cocktails using low-cost vodka. The distinctive flavor generated from the rice ingredient also adds an extra kick to the drinks.”

The Korea Traditional Alcoholic Beverage Development Association plans to hold another round of festivals with well-known specialty bars dedicated to traditional liquor. It plans to hold concerts inside bars and invite well-known chefs to make Western-style food that pairs well with traditional drinks.

“We are aiming to get rid of the old stodgy image strongly associated with traditional Korean drinks,” said Joo Bong-suk, a spokesperson from the association.