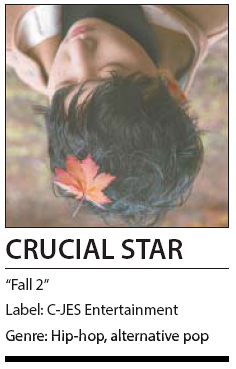 Singer-songwriter, rapper, producer, and all-around music extraordinaire Crucial Star’s latest six track offering combines a host of contemporary genre’s to create a unique record that will cater to both mainstream and underground fans of music.

Although originally recognized as an underground hip-hop artist, this particular album deviates from the most traditional sense of that musical style. Taking certain elements of jazz, R&B, and pop, the artist combines these musical flavors to produce an album that turns increasingly experimental as the record progresses.

Crucial Star enlisted the help of capable artists to feature on his album, including fellow rappers Donutman and Sik-K of “Show Me the Money” fame, singer Xia of JYJ, and vocalist Kim Na-young.

According to the rapper’s agency, this album was Crucial Star’s attempt to show a different musical side of his self. Overall, the artist mostly succeeds in his goal, producing a collection of emotional tunes that will relate well to contemporary listeners.