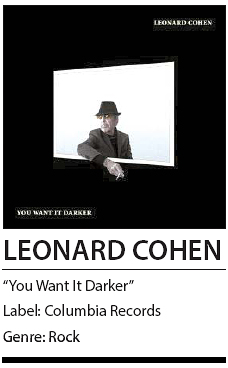 Leonard Cohen’s late, late career resurgence reaches new heights on “You Want It Darker,” an elegant treatise with deep felt layers of wisdom and a sense of finality.

Produced mostly by his son Adam, Cohen’s third studio album in five years puts his most effective musical forms through a filter of restraint. Nothing distracts from the 82-year-old’s haunting lyrics, and his vocals remain both otherworldly and down-to-earth.

A physical, naked bass line drives the title song, as Cohen’s woofer-rattling vocals are underpinned by a cantor and the Shaar Hashomayim Synagogue Choir, connections to his Montreal youth. Full of recriminations and frustrations while also ready to accept fate, it may be God who wants it darker, but it’s us who “kill the flame.’’

On “Treaty,” later reprised with a string quartet, Cohen may be putting to rest the relationship described on “Hallelujah,” with no room for illusions - “I’m so sorry for the ghost I made you be/ Only one of us was real, and that was me.’’ AP