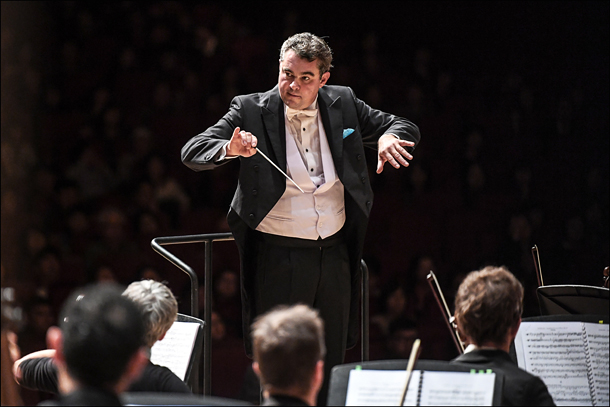 Antoine Marguier, co-founder and artistic and musical director of the United Nations Orchestra, recently brought his five-year-old orchestra to Korea to hold four concerts across the country to promote peace on the Korean Peninsula in celebration of the 25th anniversary of Korea becoming a part of the United Nations. [SEJONG CENTER FOR THE PERFORMING ARTS]

On the morning of Oct. 23, the United Nations Orchestra from Geneva, Switzerland sat down with the Seoul Civic Philharmonic Orchestra for the first time, for the first and last rehearsal before their concert that evening at the Sejong Center for the Performing Arts in central Seoul. It was also the United Nations Orchestra’s first-ever joint concert with another orchestra since its establishment in 2011.

But that evening, the two groups formed one grand orchestra of about 100 people, and created harmony through music. When the joint orchestra performed “Arirang” by North Korean composer Choi Sung-hwan, one of the three pieces they played together, the audience gave the loudest cheers and ovations of the evening.

The two orchestras came together as one and exemplified that music can bring together people from different backgrounds, languages and cultures.

Antoine Marguier, the United Nations Orchestra’s co-founder, artistic and musical director and the orchestra’s conductor, says it was possible as both orchestras are “experts in creating harmony between people with differences.”

“The two orchestras are both composed of people who are not professional instrumentalists,” said Marguier. “The United Nations Orchestra is composed of 70 members who are based in Geneva as employees of the UN or Geneva-based international organizations. They have different nationalities, speak different languages, and have different full-time jobs but they come together with the passion for music and the belief that we can be one, whatever your religion, your color or the language you speak.”

The Seoul Civic Philharmonic, also, is composed of about 35 members who are not professional musicians but have come together with their passion for music.

After the joint concert, the United Nations Orchestra staged three more concerts across the country, including at Kyung Hee University’s Grand Peace Palace on Oct. 24 - United Nations Day - as well as at the new Asia Culture Center in Gwangju on Oct. 26 and at Busan’s Geumjeong Cultural Center on Oct. 27. The tour was to promote peace on the Korean Peninsula in celebration of the 25th anniversary of Korea joining the United Nations.

Marguier said that it is a common misconception people have of the orchestra, which is only partly true.

“We are a completely independent group, kind of like an NGO,” said Marguier. “We have the name ‘United Nations’ and we do receive some support from the United Nations, but certainly not financial support.”

To hear more about the United Nations Orchestra, the Korea JoongAng Daily sat down with Marguier at the Lotte Hotel in central Seoul on the morning of Oct. 24, prior to the United Nations Day concert. Here are some edited excerpts. 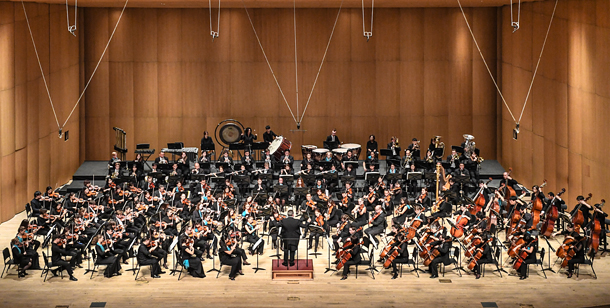 Q. How was the concert with the Seoul Civic Philharmonic?

A. It was an amazing and touching moment for me. First of all, we performed together with another orchestra we’ve never met before so it was a real meeting among people. Such a joint concert is something we are not used to. So experiencing this real, human-like interaction was a great experience for both me and the orchestra members.

You said you wanted to form an orchestra with nonprofessionals based in Geneva. Why?

Eight years ago, I came up with this idea and planned it out for three years together with the co-founder Martine Coppens. I wanted to establish this orchestra because first of all, I wanted to experience the possibility of nonprofessional musicians coming together to play music with passion. I wanted these people to come together and play in a professional way. Although they may be less skilled than those in national philharmonic orchestras, they come with passion. You don’t get that often in professional orchestras since its their career and they get paid to play, so they may not give 100 percent of their soul. But the people here, they give 100 percent.

Geneva is a small city but it’s also big because a lot of different operations are going on there, and the United Nations is a city inside a city. In this so-called “International Geneva,” there’s a big mix of international people. And I’ve been living in this city for 25 years and in my first years, I always wondered what do these people in “International Geneva” do, who they are and so on. There was hardly any interaction between these international people and the regular citizens in Geneva. There was a kind of gap between these two groups. So I wanted this orchestra to act as a bridge between the two groups living in this small city.

Since they are nonprofessional musicians with full-time jobs, their first priority may not be with the orchestra. How do you cope with the situation?

Well, it depends on which priority you talk about. For example, they used their personal vacations to come to this tour in Korea. Many of them, in fact, told me that the orchestra is their priority in life. Many of the members are travelling a lot. They are UN fellows so they go to Africa one day and comeback, to Cambodia and comeback and so on. But oftentimes, they say, they do their professional planning around the orchestra’s plan, saying that one thing they don’t want to miss is the orchestra.

The orchestra has achieved a lot in the five years since its establishment. What’s the next step?

One of the major aims for the future is to professionalize the administration of the orchestra. Since we don’t receive any support from the UN, except for the rehearsal place and the title, we don’t have budget. We make money by selling tickets and we pay all the operational costs and the rest goes to charity. Since the orchestra members don’t get paid, it cuts the operational cost but in order to develop further, we thought it’s time to get help from professionals to be more sustainable. That way, me and Martine, who are currently putting all our life into this orchestra, can make more time to think about the future than worry about everyday things.