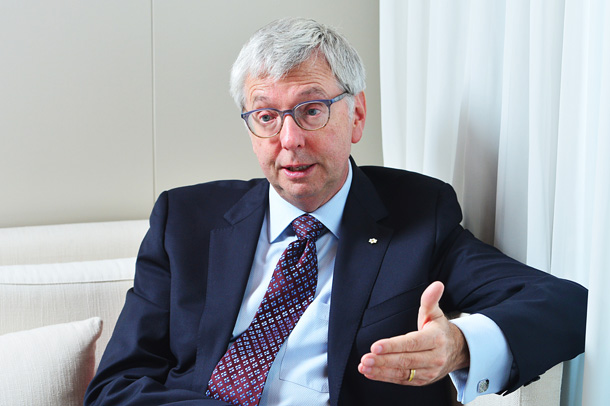 Breaking an 800-year tradition, Canadian international law scholar Stephen Toope takes up his post as the head of the University of Cambridge next year during a transitory period following the United Kingdom’s referendum to leave the European Union.

Toope, currently the director of the Munk School of Global Affairs at the University of Toronto, told the Korea JoongAng Daily and JoongAng Ilbo in an interview in Seoul last Thursday that Cambridge will have an even more important role than ever as an emblem of the United Kingdom’s global standing following the British vote on June 23 to leave the EU.

“If we are in a period where there is going to be a huge focus on figuring out how Brexit works,” said Toope, “I worry that will tend to occupy the British government and that they won’t have a lot of time be thinking about a whole range of other important issues. I think the university has a role, therefore, to make sure that those issues are not forgotten in public discourse.”

Cambridge conducted an international search and named Toope the next vice chancellor on Sept. 26. He will succeed the post from Sir Leszek Borysiewicz starting from Oct. 1 next year and will be the first non-British vice chancellor in the history of the university.

Toope was in Seoul to attend the three-day 14th Korea-Canada Forum on Exploring and Expanding Global Partnership Between Korea and Canada, hosted by The Seoul Forum for International Affairs and the Centre for International Governance Innovation, an Ontario-based think tank.

As the president of the Federation for the Humanities and Social Sciences in Canada, Toope also emphasized investment in humanities, social science and arts in a society that values science and engineering.

Toope received his bachelors’ degree in English Literature and European History at Harvard University, law degree from McGill University and his doctorate degree at Cambridge.

He also previously served as the president and vice chancellor of the University of British Columbia between 2006 and 2014 and represented Western Europe and North America on the UN Working Group on Enforced or Involuntary Disappearances from 2002 to 2007.


Q. You are the first non-British vice chancellor in the history of the University of Cambridge?

A. It’s a tremendous honor obviously to be chosen, and to be the first person who has no British citizenship is an even greater honor. I was very fortunate to be a doctoral student at Cambridge. So I have some sense of the importance of tradition at the university, and I’m very respectful of that tradition. At the same time, I think perhaps one of the reasons I was chosen is that the university does see itself increasingly as a very important international player, global player.


Did you ever dream you will become vice chancellor of Cambridge as a student of the university?

(Laughter) No, not at all. In fact, I find it in some senses rather humorous to think back when I was a doctoral student — which was a wonderful experience, I really loved it at the university — but I could never have imagined, ever, that I would go back and be vice chancellor; it’s just not something I could consider.


You’ve become vice chancellor in a post-Brexit referendum era of the United Kingdom, a decision that a lot of young people are frustrated with. What do you see as being the repercussions of Brexit?

I’ve talked with some young people who I would say are even bitter about the decision, who feel that their parents’ or grandparents’ generation had lots of advantages that were associated with being part of a united Europe and, in a sense, those generations are now potentially denying their grandchildren that advantage. I would also say that the university, it seems to me, has an even more important role than ever as an emblem of the U.K.’s global standing.


What are your major short-term and longer-term visions for the university?

One of the central preoccupations in the process was the implication of Brexit for the country, for universities and for Cambridge in particular. Cambridge is the single largest recipient of European Council research funding of any university. It has hundreds and hundreds of graduate students coming from Europe, and roughly 28-30 percent of its staff comes from Europe. So there are concerns that if Brexit goes badly — in the sense that there aren’t good agreements that are reached, if we can’t figure out how to continue to have strong relations with Europe — that the university and the country could therefore be damaged. I think that there is a real concern to make sure that Cambridge does everything it can do to send out signals of inclusiveness, that it is still an open international university, it’s not part of a narrowing of the mind, if I may put it that way, and also, very practically, that we are negotiating effectively with European powers as the Brexit moves forward.

Another important issue that I know is going to have to be dealt with is increasing the university’s capacity for interdisciplinary research. This is a challenge that most large research intensive universities face.

I think there’s been a superficial push for imagining that the only people we need in the future are engineers and scientists, and mathematicians to a lesser extent. If you look at the challenges that our societies faces, they can’t all be resolved technologically. This is one thing that actually can trouble me about the rhetoric out of Silicon Valley in the United States, where you‘ve got this sense that all we’ve got to do is invent new things and once we invent this, we’re going to solve climate change and solve problems related to economic inequality.

We’ve got to be thinking about these broader pictures issues. Climate change is a great example. We know many of the things that need to happen in order to combat climate change. We don’t lack scientific knowledge. What we lack is political ability to act. Why is that? People can be selfish, corporations can be selfish, nations can be self-interested in the way they behave. So how do we overcome those questions? We need social scientists, and we need sociologists, we need people who can help us figure out how to change behavior.

I think we need to invest in the arts, the humanities and the social sciences. The point is, they’re all necessary. It’s not to denigrate science or engineering. It’s to say, they alone can’t answer the big questions human society faces.

If there were ever to be a change of regime in the North, it might not come about in an entirely planned or peaceful way… What if there were some really detailed talks between China, the U.S., Japan, Canada, the Europeans, about how to share any burden that might take place if there were indeed an exodus of people from the North into China or, for that matter, into South Korea? That’s the kind of behind-the-scenes talk I think has to start happening if there is ever going to be a real opportunity for change in the North.


Should North Korean leader Kim Jong-un be extradited to the International Criminal Court and is this even feasible?

Well, I would say in the short term that’s not going to happen… I would say to try to bring Kim Jong-un to the ICC will not actually be easy in terms of proof at this point. Now, if the regime collapses, then I think it would much easier to find proof. It wouldn’t surprise me if something like that happened. I think it might be a strategy to try to help people come to grips with what happens after things change. But I don’t see it as a viable political strategy in order to push for change.


Do you have any advice to any Korean scholars hopeful in studying in the U.K.?