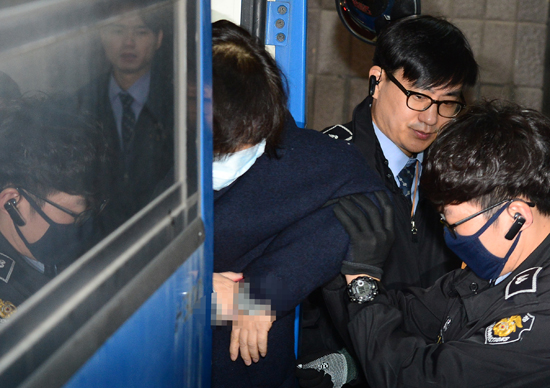 Choi Soon-sil gets off a bus to enter the Seoul Central District Prosecutors' Office Tuesday morning for the second day of questioning. [NEWSIS]

Prosecutors placed Choi Soon-sil under emergency detention at around 11:57 p.m. Monday after hours of questioning, saying she might flee or destroy evidence.

By placing Choi behind bars in emergency detention, prosecutors have 48 hours, or until 11:57 p.m. Wednesday, to file a pre-trial detention warrant to a court to keep her in jail.

Given the rising public disgust with the Park Geun-hye government, it is likely that the prosecutors will request an arrest warrant.

The 60-year-old Choi, who is alleged to have had mysterious power over the president, is also facing accusations of embezzlement, tax evasion and acquiring of classified information from the Blue House. She was transported to the Seoul Detention Center at 2 a.m. Tuesday following 11 hours of questioning at the Seoul Central District Prosecutors’ Office.

During Monday’s questioning, Choi is said to have denied most of the accusations against her, according to media reports.

On Wednesday night, Choi will either go home or be returned to the detention center after prosecutors are granted a pre-trial detention warrant by a court.