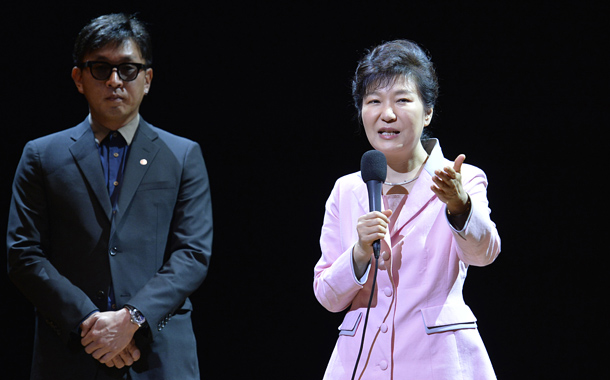 Cha Eun-taek, left, stands with President Park Geun-hye in 2014 at a theater in Seoul as she gives an opening speech before the musical “One Day” that was funded by the Ministry of Culture, Sports and Tourism and directed by Cha. [NEWSIS]

In seizing and searching the offices and financial accounts of Cha Eun-taek, a director of TV commercials and confidant of Choi Soon-sil, prosecutors are investigating whether Cha unfairly won extravagant funding and advertisement deals for high-profile cultural events during the Park Geun-hye administration.

Cha was instated as a member of the Presidential Committee for Cultural Enrichment in August 2014, and in a year was named co-head of the Creative Economy Initiative Public-Private Partnership, Park’s signature economic initiative. Reports pointed out that Cha’s sudden promotion would not have been possible without external influence, namely from his confidante, Choi.

But allegations concerning Cha’s relations with Choi extend beyond the promotion.

Cha is the de-facto head of the Mi-R Foundation, which was established with the approval of the Ministry of Culture, Sports and Tourism last October. The foundation received 48.6 billion won ($42.5 million) in donations from 19 conglomerates within two days of its launch, some of which was allegedly pocketed by Choi.

“There was always this middle-aged woman who made final decisions, but no one knew who she was,” he told JTBC. “It was only when reports on Choi came out and we saw the photo of her on news reports, that we all realized it had been Choi who ran the foundation all along.”

Cha has been nicknamed the “crown prince” among culture moguls, because President Park would show up at many of his events.

In August, 2014, President Park watched the ministry-backed musical “One Day,” and gave it a rave review. The musical was directed by Cha and got a last-minute supplementary budget of 178.9 million won six days before it premiered. Sources told a Korean daily that the order for the money came “from above at the last minute.”

The group exercise routine itself is mired in a separate branch of allegations that a ghost company run by Cha received 97.6 million won for creating a mere 10-minute video for the routine.

The routine directed by Cha also abruptly replaced a national exercise routine that the culture ministry was developing at the time with a budget of about 200 million won. Also, then-culture minister, Kim Jong-deok, was Cha’s professor at Hongik Graduate School of Film and Digital Media.

Prosecutors found evidence that the ghost company may have swallowed about 300 million won in government funds for the exercise routine.

As the co-head of the Creative Economy Initiative, Cha allegedly monopolized all projects to build 17 Center for Creative Economy and Innovation (CCEI) platforms throughout the country by enforcing exclusive business contracts between the CCEI and companies run by his close aides and confidants.

Additionally, Africa Pictures, where Cha is the CEO, and Playground Production, whose CEO is reportedly a close friend of Cha, won 11 out of 24 advertisement deals with KT this year.

Playground is also accused of monopolizing contracts with performance groups during Park’s visits abroad, along with Mi-R Foundation and K-Sports Foundation, and raking in some 1.1 billion won. Playground also ran six advertisement deals with Hyundai Motor Group within a year of its foundation, an irregular feat for newly established ad companies.

Playground’s CEO, Kim Hong-tack, has been summoned by prosecutors.

Investigations into Cha and his allegations have already spread to his other confidants, like Song Sung-gak, president and CEO of the Korea Creative Content Agency, who resigned on Monday.

Cha’s uncle, Kim Sang-ryul, professor at Sookmyung Women’s University, was promoted in 2014 to presidential secretary of education and culture, an unexpected promotion that received media attention and roused suspicion that someone may have been pulling the strings from behind the scenes.

Under the barrage of allegations concerning major officials and projects of the culture ministry, the ministry announced on Tuesday that it put together a special task force to investigate its “problematic projects.” The investigation will be headed by Jung Kwan-joo, the culture ministry’s first vice minister.

The ministry spokesman declined to specify which projects will be investigated, but reports have pointed to its controversial projects, like the Cultural Creation and Convergence Belt, as likely targets. The Cultural Creation and Convergence Belt, led from last year by Cha, had a government budget of 600 billion won from 2014 to 2019. The budget was opposed by opposition party members last year, but was passed without many changes.

Prosecutors raided Cha’s house on Oct. 26, and the companies owned or managed by Cha on Monday, as well as his financial accounts on Tuesday.

Cha, currently in China, told media sources that he intends to “return soon” to face the investigation in person.