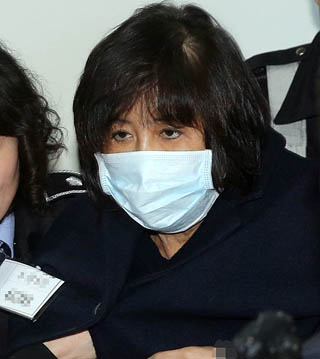 Choi Soon-sil is brought back to the Seoul Central District Prosecutors’ Office Tuesday morning for a second day of questioning. [NEWSIS]

The vice chairman of the country’s biggest business lobbying group told prosecutors that a former presidential secretary ordered him to collect donations from conglomerates for two nonprofit foundations suspected to have been created by Choi Soon-sil, the controversial friend of the president.

Lee Seung-cheol, vice chairman of the Federation of Korean Industries (FKI), acknowledged during questioning by prosecutors Friday that An Chong-bum, former Blue House senior secretary for policy coordination, told him to receive contributions from chaebol groups for the Mi-R and K-Sports foundations, the JoongAng Ilbo reported.

“I actively collected donations from conglomerates at the behest of Secretary An. He told me to pay close attention to the matter,” Lee was reportedly quoted as saying during Friday questioning.

The two foundations raised 77.4 billion won ($68.4 million) in a few days after their launches. That impressive achievement led to suspicions that Choi strong-armed conglomerates to make contributions using her connection with President Park Geun-hye through presidential secretary An. 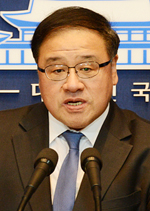 Lee’s remarks directly contradict An’s claims that he was not involved in the donation process for the two foundations or had been in contact with Choi.

Lee’s reported acknowledgement of An’s role also contrasts with his own statement at a parliamentary hearing on Oct.12.

During the hearing, Lee denied there had been pressure from the Blue House on companies to make contributions, claiming companies had contributed “at their discretion.”

With Lee’s testimony, prosecutors are set to summon An, whose resignation was accepted by the president Sunday, for questioning today.

Late Monday night, prosecutors placed Choi Soon-sil under emergency detention after hours of questioning, saying she might flee or destroy evidence. The prosecution also cited the possibility of Choi hurting herself if she was allowed her freedom.

By placing Choi behind bars in emergency detention at 11:57 p.m. Monday, prosecutors have 48 hours, or until 11:57 p.m. Wednesday, to file a pre-trial detention warrant to a court to keep her in jail.

A prosecutor involved in the case said prosecutors will file a pre-trial detention warrant today, which will then be reviewed by a court. The prosecutor said Choi denied accusations against her both on Monday and Tuesday.

A court reviewing the warrant will have Choi attend a review session with a lawyer to hear her defense.

With rising public disgust with the Park Geun-hye administration and Choi’s mysterious, behind-the-curtain role, a court is expected to grant the warrant.

The 60-year-old Choi is facing accusations of embezzlement, breach of trust, tax evasion, violating foreign exchange laws and the acquiring of classified information from the Blue House, among others. She is also accused of pressuring Ewha Womans University to admit her daughter, Chung Yoo-ra, even though her daughter failed to meet qualifications, and to give her good grades.

Ewha’s alleged special treatment of Chung has sparked outrage among people in their 20s, who go through cutthroat competition to get into well-established universities such as Ewha in an education-crazed society.

President Park’s controversial friend was brought back to the prosecutors’ office at 10 a.m. Tuesday for a second round of questioning.

The prosecutors’ questioning of Choi, which came 31 hours after she returned to Korea Sunday morning, has generated high public interest. Reflecting that interest, local media reported Choi’s choice for dinner Monday, which was gomtang, or beef-bone soup, and that she ate most of it. “Choi Soon-sil’s gomtang” was among the most searched terms on portal sites after reports.

TV Chosun, a cable channel, put a countdown clock on its program displaying the time left for prosecutors to file a pre-trial detention warrant for Choi, which is 11:57 p.m. today. 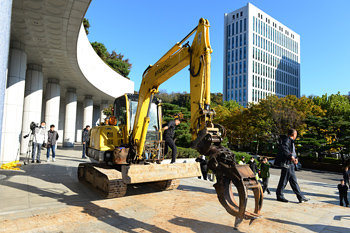 Enraged by the Choi Soon-sil scandal, a 45-year-old man plowed an excavator into the Supreme Prosecutors’ Office in Seocho District, southern Seoul, on Tuesday. He carried the excavator on a truck from Sunchang in North Jeolla, some 360 kilometers (224 miles) south of Seoul, earlier in the day. He said he wanted to help Choi kill herself. [NEWSIS]

Angered by the snowballing allegations about Choi and President Park, a man surnamed Chung rammed his excavator into the Supreme Prosecutors’ Office at around 8:20 a.m. Tuesday. The 45-year-old man drove a truck from Sunchang in North Jeolla, some 360 kilometers south of Seoul, earlier in the day with the excavator on it. He passed through the front gate on the excavator, inflicting a minor injury on a security guard, before approaching the front door of the building. Ultimately, he was apprehended.

He reportedly told authorities he came to the office to help Choi die. She told reporters a day earlier that she had “committed a sin that deserves death” and expressed her apology to the public and asked for forgiveness.