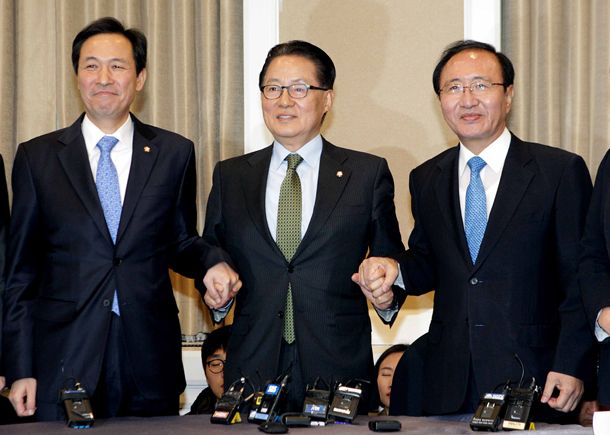 Opposition parties pressured President Park Geun-hye Tuesday to remove herself from actually running the country, threatening a National Assembly investigation into a snowballing abuse of power scandal and an independent counsel probe.

Floor leaders of the Minjoo Party of Korea, the People’s Party and the Justice Party coordinated their reaction Tuesday to the unprecedented scandal threatening Park’s presidency. Her longtime friend Choi Soon-sil was arrested by the prosecution on Monday on charges of embezzlement, tax evasion and unauthorized access to presidential materials concerning state affairs.

They demanded that Park be stopped from directing state affairs any longer.

The three parties, however, failed to reach an agreement on a proposal to appoint a neutral prime minister or form a bipartisan cabinet to fill the power vacuum.

While the Saenuri Party agrees broadly to such a plan, the People’s Party and the Justice Party demand preconditions: that Park resign from the presidency and give up her Saenuri membership.

The Minjoo Party has yet to decide its official stance, although the proposal for a neutral prime minister and bipartisan cabinet was first made by its presidential frontrunner Moon Jae-in.

Rep. Woo Sang-ho, floor leader of the Minjoo Party, said Tuesday the party’s stance is not automatically identical to that of a presidential candidate. “The issue seemed to be confusing, because the party leadership never spoke about its position, but [Moon] proposed it first,” he said. “It is a burden for the party that a strong candidate’s remark is considered a message of the party.”

He also criticized the Saenuri Party, saying it has already decided on its own prime minister candidate and wants to ram that through with the Minjoo Party’s endorsement. “We have no intention to cooperate,” he said.

Some Minjoo lawmakers, however, expressed their support for the plan.

“The president has lost her position in the people’s hearts,” said Rep. Kim Hyun-kwon at a lawmakers’ assembly. “That’s why our party must actively participate in the discussion to form a bipartisan cabinet.”

“We must have our stance in order to prevent anarchy,” said Rep. Lee Hoon. Another lawmaker, Sul Hoon, said the party must make clear its demand that Park no longer run the country when a bipartisan cabinet is formed.

The Saenuri Party criticized the three parties’ move. “This is not an attempt to reveal the truth behind the Choi scandal or to cope with chaos in state affairs,” said Rep. Min Kyung-wook, spokesman of the party. “It’s a calculation to use the current situation to push forward their agenda.”

Park replaced her presidential chief of staff and scandal-ridden secretaries last week. She is expected to appoint a new prime minister and hand over some of her former powers, including the right to choose ministers, to calm an angry public.

The poll was conducted on Monday and had a confidence level of 95 percent and a 3.1 percentage-point margin of error.

The drop was particularly severe in her political turf of Daegu and North Gyeongsang. She was supported by 44.3 percent in the region last month but by only 8.8 percent on Monday.

Asked if Park has to step down, 67.3 percent said she should.

In another poll announced by the Munhwa Ilbo, 48.2 percent of the respondents said Park should no longer serve as president. Among them, 36.1 percent said Park must resign, while 12.1 percent said she should be impeached.