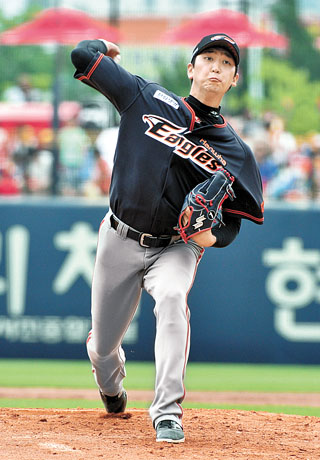 While the Hanwha Eagles have been criticized for making bad investments to recruit FAs, Shim Soo-chang, an FA pitcher who joined the Eagles before the season, is considered an exception. [NEWSIS]

While many consider the 10 billion won ($8.7 million) investment the Hanwha Eagles paid in the past few years for free agents (FA) a grand failure, Shim Soo-chang, a veteran righty for whom the Eagles dropped 1.3 billion won, proves there’s another side to the story. The pitcher took up any role required by his team, whether relief or starting assignment, and raked in five wins, five losses, six holds and two saves, quelling criticism from the start that he was overvalued.

The Eagles are currently in Japan for a camp to close out the season. While normally the younger players or backups participate in the after-season camp, Kim Sung-keun, the skipper, decided to include his top pitchers, which means Shim, too. As he was leaving for the camp, Shim said, “It’s been a while since I’ve attended the after-season camp. I think I’m going to start working on my conditioning for the next season during the camp.”

Over the transfer window last year, the Eagles inked a four-year FA deal with Shim worth 1.3 billion won. Shim had just become an FA after 13 long years in the league. But when the Eagles brought him aboard, critics cried out that as a seasoned player who was well into his 30’s, his utility was questionable and so it wouldn’t be worth paying that much for the pitcher. “I knew how I was evaluated,” Shim recollected. “I had to show up and prove everyone wrong.”

But he was not off to a good start. During spring camp, he caught the flu, which eventually forced him out of the starting roster for opening day. To make matters worse, the Eagles fell into a grave slump.

It wasn’t until April 19 that Shim came to the mound, finally making his debut as an Eagle. And as he said, he showed up and proved everyone wrong, tossing in 66 games, including 10 starting stints.

No longer was he seen as a nuisance, but rather a quintessential case of a player outperforming his payroll. “It felt good hearing that,” Shim said. “I think for a pro ball player such as myself, such assessments are something to be proud of. I went back and forth between starting assignment and bullpen but I really couldn’t care less when I played. The team was in a pinch and all I thought about was winning.”

Shim never failed to show up throughout the season and even managed to set a career milestone. For the third time in his career, he tossed in more than 100 innings, pitching in 113 and 1/3 innings from April to October. “I felt confident after exceeding the 100-inning mark,” Shim said. “I am now looking forward to next season.”

It’s a job well done, but in Shim’s mind, 2016 will not be remembered as a good year. “I am glad to be recognized, but thinking about how the team did, I couldn’t be all smiles,” Shim explained. “I watched the postseason games on television. Hopefully, instead of watching them, I will actually be playing in them next year. I just took off from the starting line and I had a good start, but next year, I hope to pitch in the opening game.”