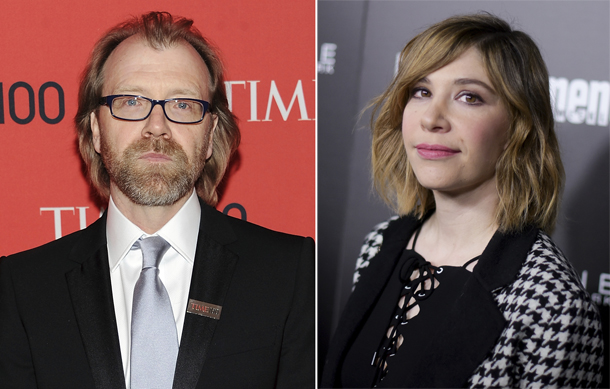 NEW YORK - It’s not hard to understand why author George Saunders and rock star-actress-author Carrie Brownstein admire each other.

Co-hosting a reading Tuesday night in Manhattan, they each showed a sly, self-deprecating humor and a belief in the redemptive power of art. Saunders, one of the country’s most acclaimed and popular short story writers, told a capacity audience at the Symphony Space performance center that the “raw energy” of Brownstein’s music re-energized him at weary moments and made him “fall in love with art again.” Brownstein, known for her work with the indie band Sleater-Kinney and as the star of “Portlandia,” praised Saunders for transforming “absurdism into a language of love.”

Reading Saunders was like being “tickled with a fist or punched with a feather,” she said.

The two-hour event was billed, simply enough, “An Evening With Carrie Brownstein and George Saunders.” It was the latest presentation of Selected Shorts, the popular and nationally aired Symphony Space series that brings together actors, authors and musicians.

The guests Tuesday were actors Greta Gerwig, Josh Radnor and BD Wong, reading fiction by Saunders and excerpts from Brownstein’s memoir “Hunger Makes Me a Modern Girl.” Brownstein herself read a passage from the book about the time Sleater-Kinney opened for Pearl Jam and found itself on a stage larger than the entire space of the clubs they were used to playing.

During a brief question and answer session during the latter part of the program, Brownstein and Saunders shared stories about the pain and the virtue of insecurity. Saunders spoke of the inevitable moments while writing when he’s sure the story is no good, and neither is he.

“You beat yourself up,” he said. But he then reminds himself that “This is the part where I think I suck” and gets back to work.

Saunders described the moment when he discovered his literary voice, the dark and unpredictable humor found in such collections as “Tenth of December.” He had been toiling for years on fiction his wife politely described as “interesting.” Then one day she observed that the cartoons he used to doodle while writing were closer to his spirit than the prose.

Saunders realized he had been “suppressing” his best qualities, his wit and his love for popular culture, “all the stuff” he had thought unworthy of literature.

Brownstein said she has brief sparks, feelings of “crystallization,” that are “followed almost immediately by very intense doubt.” But doubt is what keeps creativity alive.

“The choreography of sameness is very dangerous,” she warned. “When there’s a new step to take, hopefully it’s progress.” AP