A nation without a president

A nation without a president 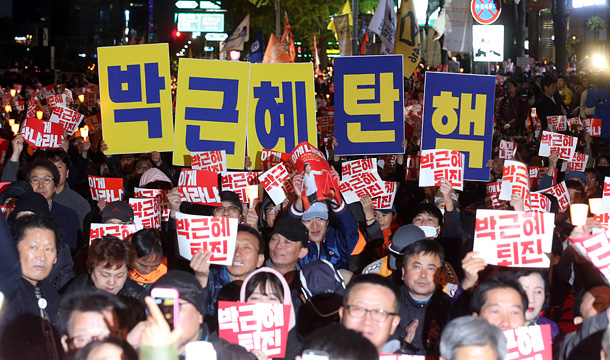 Citizens on Saturday call for President Park Geun-hye to step down amid a scandal involving Choi Soon-sil’s overreach in state affairs.

I was at a public bath house with my father when the news came out. “President Park Chung Hee has passed away,” my father told me with a stern face.

I felt like crying. “What if the North Korean army invades us and Korea collapses?” I wondered. As a sixth grader who faithfully studied civics in class, living in a nation without a president was shocking and frightening. Fortunately, a war did not break out.

On March 12, 2004, the National Assembly passed a bill to impeach President Roh Moo-hyun. Once again, I was living in a country without a president, but it wasn’t as scary this time because we had learned from experience. The country did not face a disaster in the 63 days between the bill passing and President Roh returning to office after the Constitutional Court ruled against his impeachment. The prime minister had substituted for the president, and things went smoothly.

The prime minister is literally the highest minister in the British cabinet. Despite Brexit and other controversies, the United Kingdom, though, is doing just fine without a president.

According to Korea University Prof. Hahm Sung-deuk’s book “The Presidency,” Korea first began to use the word daetongryeong to describe the president of the United States in the late 19th century. The translation implies the president is a strong leader on par with the king. During World War II, the provisional Korean government in Shanghai used daetongryeong as a title for its highest leader.

During times when a president is nearly absent, I feel there is a void that needs to be filled by a strong leader. Every president in Korea has met a tragic ending, and citizens suffer from the chaos every time. Perhaps it is about time to end the dreadful repetition of history.