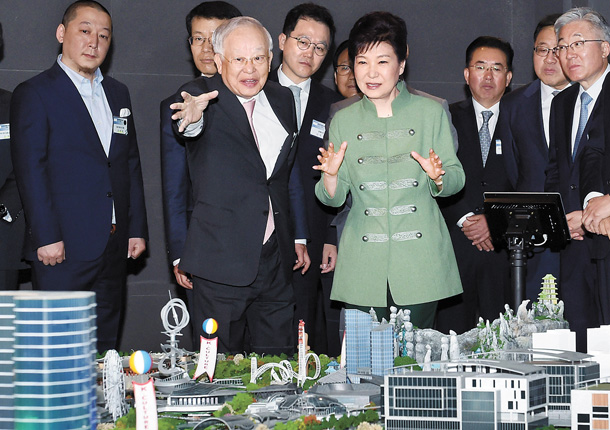 The influence of Choi Soon-sil, a friend of President Park Geun-hye, is seen in the business affairs of multiple conglomerates, including business giant CJ Group.

The JoongAng Ilbo on Tuesday confirmed CJ’s investment of more than a trillion won in a cultural business project dubbed “Cultural Creation and Convergence Belt” led by Cha Eun-taek, a director of TV commercials and a confidant of Choi. Speculations of the link between CJ’s business and forces behind it arose after CJ Group Chairman Lee Jay-hyun was on trial for charges he embezzled 160 billion won ($140 million). Speculators questioned whether CJ’s investment helped free the troubled chairman from prison.

Chairman Lee was actually released from prison on a presidential pardon ahead of Liberation Day in August, when the cultural belt project was making strides.

Cha was appointed to head the Cultural Creation and Convergence Belt project led by a committee under the Ministry of Culture, Sports and Tourism. The government set a budget of 611.2 billion won from 2014 to 2019 for the project, though the budget was opposed by opposition party members. The original purpose of the project was to create a cultural business belt connecting Seoul, Ilsan in Gyeonggi and Seogwipo in Jeju. From planning cultural content to creation, realization and re-investment, the government said it wanted to spur cultural business.

But according to Korean broadcasting media agency TV Chosun, it was Choi who mapped out a 40 billion won plan to establish the Creative Center of Convergence Culture, a command center for the cultural belt project, from June through September 2014. In only five months the business progressed and whenever important deals were discussed CJ participated. Gradually, many links have been created between Cha, the cultural belt project and CJ Group.

In February, when the Cultural Creation and Convergent Belt project was launched at the CJ E&M headquarters in Sangam-dong, western Seoul, President Park gave the congratulatory speech. The Creative Center for Convergence Culture was also set up there. Kang Myung-shin, an executive at CJ Group, was appointed head of the center.

On the same day as the launching ceremony, CJ E&M submitted a letter of intent to the Gyeonggi provincial government to participate in the K-Culture Valley project, establishing a 1.4 trillion won theme park related to Korean entertainment and culture in Goyang, Gyeonggi. K-Culture Valley was a core business laid out by Choi’s cultural belt project.

In addition to CJ’s involvement in the project, the process of the business raised suspicions.

Gyeonggi Province said in September 2015 that it would lease land at only a percentage of the original land price if a consortium participating in the bidding could include a certain ratio of foreign investment before the deal was inked.

However, CJ E&M satisfied the proposed condition only a month after it won the project, in June, by attracting 5 billion won investment from Bangsawan Brothers, a Singaporean investment company established in May 2015.

The Gyeonggi Assembly has begun investigating in the administrative process of the project, saying “Gyeonggi Province and CJ E&M conferred on costs to use land [in Gyeonggi] at cheap prices.” Park Yong-soo of the Minjoo Party of Korea is heading an investigation on whether Gyeonggi Province granted favor to CJ. “It is true Bangsawan Brothers passed through screening of the Ministry of Trade, Industry and Energy but Gyeonggi Province, the main contractor, does not have any information on the company and even when we made calls to the Singaporean company it seemed like a paper company not locally in business.”

“We invested in the cultural belt project because we thought the business goes well with Korea’s flagship cultural business company CJ Group during meetings with the nation’s Culture Ministry from December 2014,” a spokesperson from CJ said. Regarding Bangsawan Brothers, CJ said “the company has been confirmed of existence as we already submitted a document of audits on [Bangsawan Brothers] by a global accounting firm to the Gyeonggi Province.”