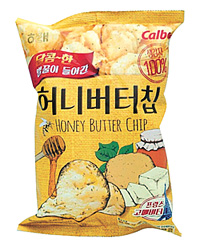 Honey Butter Chips, which started a craze for honey-butter flavored products across Korea, have had sales of 200 billion won ($174.43 million) in the 27 months since their release, manufacturer Haitai announced Wednesday.

“Data show aggregate sales surpassed 200 billion won in late October,” said Haitai’s spokesperson. “This is the shortest time [for an individual product to exceed that level].”

Honey Butter Chips are still selling steadily, grossing an average of 7 and 8 billion won every month.

The company was a pioneer in the sweetened potato chip market, Haitai explained.

The product ranked fourth place in the entire snack market in the second half of 2016, with sales of 55.2 billion won in those six months. To celebrate its achievement, the company will give away 200 dons of gold (26 ounces) to customers in a marketing promotion called “Find the Golden Butter Chip.” Consumers can play the game by punching in code numbers enclosed within every pack of Honey Butter Chips on a website.