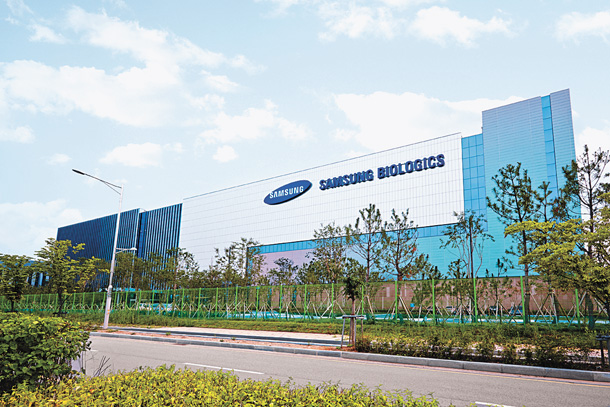 Samsung BioLogics, a producer of complex biologic drugs for international pharmaceutical companies, offered its shares for sale to the public on Wednesday, a week ahead of its IPO.

One out of 4.1 investors grabbed the chance to purchase shares Wednesday, which seems to be relatively less popular than its affiliates, Cheil Industries and Samsung SDS, both of which were listed in 2014.

“Investors seem to be taking a wait-and-see attitude given it’s the first day,” said a brokerage house spokesman.

Investor sentiment in biopharmaceutical shares worsened recently largely due to a recent trading scandal involving Hanmi Pharmaceutical. The company, listed on the Kospi, is accused of leaking inside information about its termination of a contract with German drugmaker Boehringer Ingelheim to enable some investors to dump their shares ahead of the announcements. Its share prices have nearly halved since Sept. 30, the day the company announced it was ending the deal.

The drug-manufacturing unit of Samsung has offered 3.38 million shares, or 20 percent of the shares it will debut on the benchmark Kospi, to interested investors during the two-day sale. Shares are priced at 136,000 won ($118), the top end of the company’s range, after 97 percent of institutional investors expressed willingness to pay 113,000 won to 136,000 won.

The biologic drug manufacturer, one of the world’s largest, aims to raise 2.25 trillion won through its IPO, which could become the second largest in the world this year after Dong Energy’s $2.6 billion listing on the Copenhagen Exchange in June.

Following the IPO, the market cap of Samsung BioLogics is expected to reach as much as 8.99 trillion won, landing it among the top 30 listed companies on Korea’s main bourse.

Samsung, the world’s top producer of smartphones, TVs and memory chips, is now betting on biopharmaceuticals for growth. The global market for biosimilar products, the lower-cost copies of complex biotech drugs, was $2.29 billion last year but is forecast to skyrocket to $6.22 billion by 2020, according to market researcher MarketsandMarkets.

With capital raised through the IPO, Samsung BioLogics plans to build a factory with the additional annual manufacturing capacity of 360,000 liters by 2018.