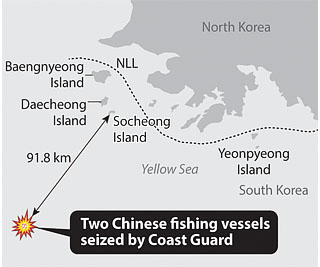 The Coast Guard for the first time used a crew-served weapon, which requires a crew of at least two people to operate it, to crack down on Chinese vessels illegally fishing in Korean waters, firing hundreds of shots with its M60 machine guns Tuesday.

Warning shots were fired by the Coast Guard as a group of 30 Chinese fishing ships tried to interfere in its seizure and transfer of two vessels illegally operating in waters off the coast of Incheon in Korea’s exclusive economic zone, or EEZ.

At around 5:00 p.m., the Coast Guard detected unauthorized Chinese vessels fishing in waters around 92 kilometers (57 miles) southwest of Socheong Island, near the Northern Limit Line, or NLL, the de facto maritime border with North Korea. They were operating within 5.5. kilometers of Korea’s EEZ.

As the Coast Guard sent out its speedboats to seize the illegally operating fishing vessels, about 30 Chinese boats flocked together and sailed in to block the Coast Guard speedboats and its patrol ships. The Coast Guard told the approaching Chinese vessels that it would use it crew-served weapons if they did not back off, but that didn’t stop some of the boats from attempting to close in and ram the Coast Guard’s 3,000-ton patrol ship.

In response, the Coast Guard fired warning shots from four M60 machine guns, aimed at the sea and sky. But as that did not deter the Chinese vessels, some shots were fired toward the ships’ hulls. Some 600 to 700 shots were fired from the M60s by the Coast Guard between 6:44 p.m. and 7:33 p.m., after which the fishing vessels finally pulled away and headed back to Chinese waters.

According to the Coast Guard, they were authorized by the Korean Ministry of Public Safety and Security to “fire an aimed shot if necessary.”

There were no reported injuries or damages to the Coast Guard.

vessels. Last month, the Korean government authorized the Coast Guard to use martial force against illegal fishing vessels from China if they are violent.

The Ministry of Public Safety and Security announced it will allow the use of martial force if necessary to seize illegal fishing vessels, including live firearms and the mobilization of patrol vessels to ram ships that attempt to flee or use violence.

This action follows the sinking of a Coast Guard patrol vessel by two Chinese fishing boats that were fishing illegally in Korean waters early last month, an act that was strongly protested by Seoul.

“At first, we broadcast warning messages,” said Kim Jeong-sik, an official with the Korea Coast Guard’s Central Regional Headquarters, “but the Chinese fishing vessels continued to approach and threaten us, so we used crew-served weapons.”

He added, “In order to decrease injuries, we aimed for the part of the ship where there were no people.”

According to the Public Security Ministry, the 20 crewmembers of the two Chinese vessels were transferred to the Incheon Coast Guard to undergo investigation. The two seized 98-ton Chinese ships had 10 crew members each, including its captains.

On Wednesday afternoon, there were around 100 Chinese fishing vessels spotted illegally operating near the NLL. This is down compared to last year, when some 200 to 300 vessels were detected during the blue crab fishing season in September and October.

The Incheon Coast Guard plans to question the crew and their captains on the details of their illegal fishing operations and their relationship with the 30 vessels that fled.