Former Blue House secretary An questioned over role in scandal

Former Blue House secretary An questioned over role in scandal 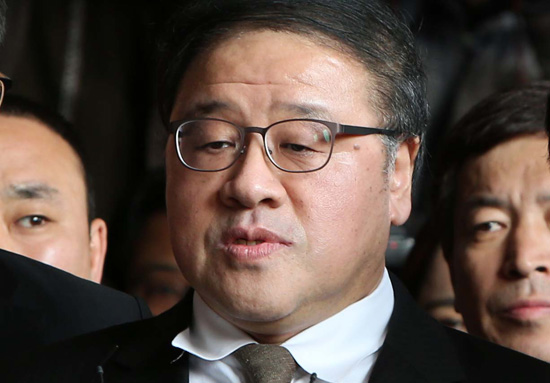 An, a former economics professor, is accused of strong-arming conglomerates to make contributions worth 77.4 billion won ($67.3 million) in total to two nonprofit foundations thought to have been created by Choi.

Standing before reporters on his way into the prosecutors’ office at around 1:56 p.m., a somber-looking An said, “I feel very heavy-hearted,” adding he would “take responsibility for any wrongdoings.”

In the past, An denied that he was involved in raising donations for the Mi-R and K-Sports foundations. He also denied knowing Choi.
But Lee Seung-cheol, vice chairman of the Federation of Korean Industries, reportedly told prosecutors during questioning Friday that he had been instructed by An to receive contributions from conglomerates.

When asked by reporters whether he had played a role in the collection process, An said he would tell “everything to the prosecutors,” which sparked speculation he may acknowledge his involvement to prosecutors.

The next question is whether An would say that President Park instructed him to collect donations for the foundations. The Dong-A Ilbo reported Wednesday that An told his acquaintance he was involved in the creation and management of the foundations “at the behest of the president,” and that the president and Choi had “direct business dealings.”

The foundations are suspected of being started to serve as slush funds for the president after she leaves office.

An’s questioning came three days after his resignation was accepted by President Park along with the resignations of other top secretaries at the Blue House, a reshuffle that was supposed to mollify a public outraged by the snowballing scandal. The president’s approval rating plunged to single digits in the latest poll.