Koreans of all walks of life petition for probe

Koreans of all walks of life petition for probe 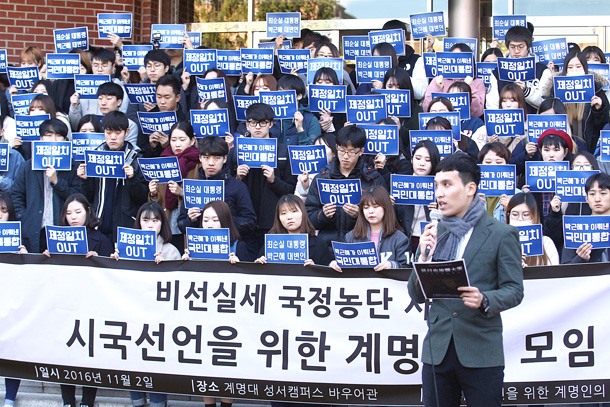 Students of Keimyung University in Daegu, President Park Geun-hye’s hometown, demand on Wednesday that Park be thoroughly investigated and answer to the law over allegations that she allowed her friend to meddle in top state affairs. [GONG JEONG-SIK]

Middle school students, religious leaders, online communities and even Korean immigrants abroad are taking up the nationwide call to demand the resignation of President Park Geun-hye over the latest scandal concerning her friend, Choi Soon-sil, and her alleged influence over top state affairs, not limiting their means to written declarations but expanding them to satirical stories and poems, as well as art pieces and performances.

“Ages ago in Hell Joseon, there lived a princess … with such a short capacity in brain power,” starts a story written by a Yonsei University student. “When the princess lost her mother and turned 23, a shaman surnamed Choi sought a visit with her.”

The story, which surfaced on Oct. 27 and by Wednesday had gained more than 20,000 likes on Facebook, centers on how the shaman takes over the country by controlling the princess, and stems from the national scandal concerning Choi and Park. Choi’s father, Choi Tae-min, the late mentor to Park, was the founder of a cult known as Yeongsegyo, or “Eternal World,” which combined tenets of Buddhism, Christianity and Korea’s indigenous Confucian-shamanist movement, Cheondoism. Hell Joseon is a term referring to the difficulty of life in Korea.

Choi Soon-sil, as a confidante to Park, is alleged to have had access to top-secret national security documents, influencing personnel appointments in the Park administration, and strong-arming conglomerates to raise slush funds.

Students at the Korea National University of Arts performed on Monday a show of shamanistic exorcism on campus “to rid all threats to the nation” and read their declaration to demand the Park administration’s resignation. Professors and students at more than 100 universities nationwide are taking part in the movement.

Its momentum is spreading to younger students, too, as students from about 10 middle schools in Gimje, North Jeolla, rallied on the streets on Tuesday calling for the Park administration to step down. They had reported to the local police in advance that they would be holding a public rally from Tuesday to Wednesday.

“We wanted to show that students care about what’s happening in the government,” said a 16-year-old surnamed Cho, who is leading the rally.

Religious leaders are also stepping up to voice their protest.

“The interference in state affairs [by Choi] is a violation of the Constitution,” the Catholic Justice and Peace Committee said in a statement issued on Tuesday. “The president must take responsibility.”

The Christian Council of Korea also issued a statement on Tuesday, requesting “a special prosecution investigation into Choi and the scandal” and to “punish all involved, regardless of their official status.”

A Buddhist coalition held a press conference on Tuesday at the Jogye Temple in Jongno District, central Seoul, and announced their decision to “stand with the people so that Park and Choi, and others involved in the scandal, will step down.”