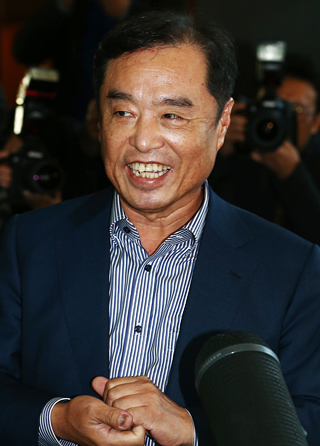 President Park Geun-hye’s attempt to salvage her presidency by appointing a new prime minister from across the political aisle merely fueled opposition parties’ fury Wednesday - because she didn’t bother consulting them about her choice.

It also made Kim’s confirmation by the National Assembly extremely unlikely. Opposition lawmakers have a majority in the Assembly.

“Park must step down immediately,” Rep. Ahn Cheol-soo, former chairman of the People’s Party and a likely presidential contender in the 2017 race, said in a press conference. “She is no longer the president of the Republic of Korea.”

“She should have confessed her crimes of breaching the Constitution and issued a heartfelt apology, and she did none of those - but named a new prime minister,” Ahn said. “She exercised her appointment right without offering a proper apology. This is an insult to an angry people’s righteous demand. This is making a mockery out of the people who desire truth and justice. This is a trick to stir up a controversy in the National Assembly over the confirmation process of the prime minister and save her neck. But no political operation is capable of covering the Park-Choi scandal.”

A public policy professor of Kookmin University, Kim was an architect of the Roh administration’s major policies on government reform and decentralization.

The 62-year-old native of Goryeong, North Gyeongsang, maintained a close relationship with the late president for decades. In the liberal Roh administration, Kim served in various key posts. He was Roh’s chief policy secretary and the deputy prime minister in charge of education.

After Saenuri Chairman Lee Jung-hyun admitted that he was not notified in advance, Park adversaries said it was lamentable that she acted without consulting the National Assembly.