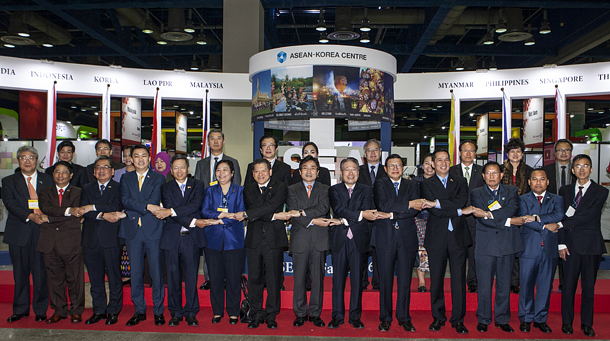 A food festival introducing the distinctive tastes of the 10 members of the Association of Southeast Asian Nations (Asean) kicked off Wednesday at COEX in southern Seoul.

Hosted by the ASEAN-Korea Centre and sponsored by the Ministry of Foreign Affairs, the ASEAN Culinary Festival 2016 runs through Saturday at Hall B of COEX, offering a wide variety of food items prepared by star chefs from each country.

The culinary festival is held in conjunction with the ASEAN Fair 2016, which includes a food exhibition that promotes food and beverages.

Kim Young-sun, secretary general of the ASEAN-Korea Centre, said Wednesday during a launch ceremony that he hopes the ASEAN Fair “presents opportunities for Asean and Korea to enhance their business network and economic cooperation.”

Kim said the fair will demonstrate the competitive food products of Asean and the wide spectrum of Asean culinary culture.

Thai Ambassador Sarun Charoensuwan said in congratulatory remarks that he hopes the “Asean wave will slowly and steadily reach the shores of Korea through culture and food.”

Manilath Keodalavong, wife of the ambassador of Laos, who volunteered to cook for the Laos booth in the festival, said she was glad to see the Korean crowd enjoy her food, which included the most popular dishes from her country: laap, khao niew and tam mak taeng, among others.