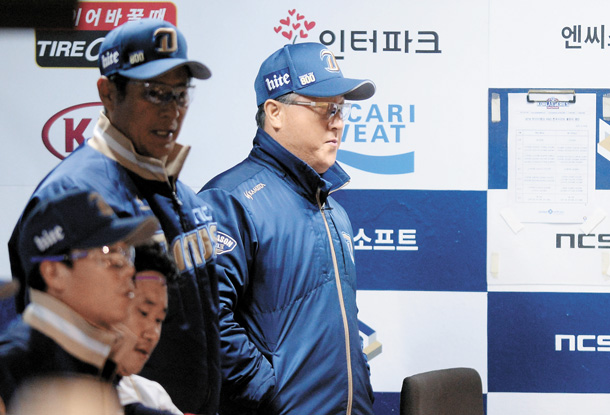 What will happen to NC Dinos manager Kim Kyung-moon now that his contract with the club has expired?

In the final year of his contract, Kim stood in the dug out on Wednesday and watched helplessly as his team fell to the Doosan Bears 8-1, being swept four to none by the champions in this year’s Korean Series.

The Dinos were essentially outplayed by the Bears back to front, but the most noteworthy was the Dinos’ slumping batters. The team’s batting quartet of Na Sung-bum, Eric Thames, Lee Ho-joon and Park Sok-min were originally thought to be the needed weapon in the head-to-head against the Bears.

The four, who together had a combined 115 home runs and 425 RBIs during the regular season, went almost entirely hitless on Wednesday, with foreign slugger Thames being the only one of the four to tally any hits. Thames cranked a solo homer in the ninth inning to give the only run the Dinos scored. The team’s batting swings were futile against the Bears’ starting pitchers, Dustin Nippert, Michael Bowden, Yoo Hee-kwan and Jang Won-jun, who managed to pitch into the sixth inning. All in all, the Dinos slugging quartet went 5-for-52 during the Korean Series.

“All the players and the coaching staff worked hard for this but things did not go as expected,” Kim said after the game on Wednesday. “I think the responsibility falls on me, but I am going to take another crack at it,” he quickly added, hinting at the possibility of extending his contract.

Kim assumed his current managerial post in 2011 as an inaugurating member, coming to the helm of the newly established Dinos.

Kim and the Dinos extended his contract in January 2014 for three years, which means the 2016 season is his last one under the current contract. The Dinos did not renew their contract with the skipper during the season, unlike the past when they went ahead with renewal well before its expiration. Rumors that the renewal will fall began to spread, although nothing has been determined yet.

The season was rife with unfortunate events for the manager. Dinos pitcher, Lee Tae-yang, was charged with game-rigging while another pitcher, Lee Jae-hak, is also under investigation for similar allegations.

Some insiders say the DUI of foreign slugger Thames may suggest possible discord between the club and the manager. After Thames was caught driving under the influence, the Dinos kept the skipper in the dark for five days. Bae Seok-hyeon, general manager of the Dinos, explained, “So many unfortunate events took place in a short span of time so we decided to not to tell Kim about this.”

“I think I may have to take responsibility for the event,” Kim later said, hinting at his possible resignation. “I apologize.”

Later, the Dinos explained that there is no disharmony between the manager and his team, but some still remain skeptical.

Regardless of his future, the loss at this year’s Korean Series has further dented Kim’s managerial career.

Kim previously watched over the Bears from 2004 to 2011, leading them to the Korean Series in 2005, 2007 and 2008, only to come up short and finish as runners-up every time. “Finishing second isn’t bad,” Kim said before the onset of the Korean Series, “but it’s still painful.”