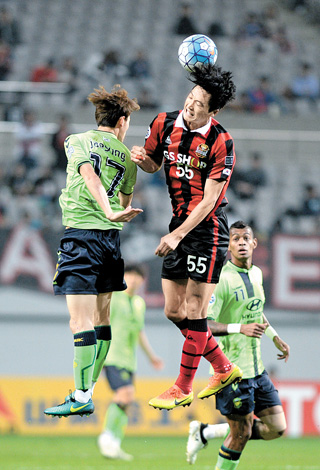 Granted, the K-League Classic does not have finals per se, but this Saturday’s match between FC Seoul and Jeonbuk Hyundai Motors will nevertheless have a vibe every bit as intense as that of a championship football match.

Everything about the 2016 K-League Classic season comes down to this weekend’s game. While Jeonbuk and Seoul are tied in terms of points at 67, Jeonbuk is in the lead in terms of goal difference. However, if Seoul wins this weekend’s showdown, earning themselves three points, they will take the title from this year’s K-League.

Jeonbuk have been dominating the league throughout the season, but with a bribery scandal, they were docked nine points. Then their unbeaten streak came to an end when they lost to Jeju United FC in the first round of split round. While Jeonbuk were struggling to stand on their feet, Seoul exploited Jeonbuk’s brief downfall and caught up to them by taking down Ulsan Hyundai FC.

But Jeonbuk refused to go down, managing to stay ahead by edging out Jeonnam Dragons 5-0 and Sangju Sangmu 4-1, although Seoul also collected points with victories over Jeju and Jeonnam during the same period. With the final rally by the two, the winner of the final match of the season will take it all.

Jeonbuk have the upper hand in terms of head-to-head records with four wins and one loss against Seoul this season. The loss comes from the second leg match of the ACL semis last month, but in the league, Jeonbuk have the advantage. This will likely be a morale booster for Jeonbuk.

Further upping Jeonbuk’s prospect for the win is the fact that they are hosting Seoul at their home turf in Jeonju, where they hold 13 wins, four losses and one draw this season. If Jeonbuk take the trophy after this Saturday’s showdown, they will be the third team in the history of the K-League to take three consecutive league titles.

Of course, Seoul will not let Jeonbuk take the trophy easily. They haven’t had a single loss in the league since the second week of September, and none during the split round. They are also in the finals of the Korean FA cup, aiming for a double-crown domestically this year.

Regardless of the result of the final matchup, both Jeonbuk and Seoul will gain a foothold in the group stage of next year’s Asian Champions League (ACL). Korea has 3.5 slots for the ACL, and regardless of the result of the final game, Jeonbuk and Seoul will finish the league first and second. And due to goal difference, Jeju will finish third over Ulsan whether they win the final match of the season against Sangju. If Seoul takes down Suwon in the FA finals, then Jeju will go straight to the ACL group stage while Ulsan will play in the qualifying round for a shot at the ACL.

At the end of the day, there will be little drama in terms of ACL slots but many climatic turns are expected in terms of where the K-League Classic trophy will wind up. 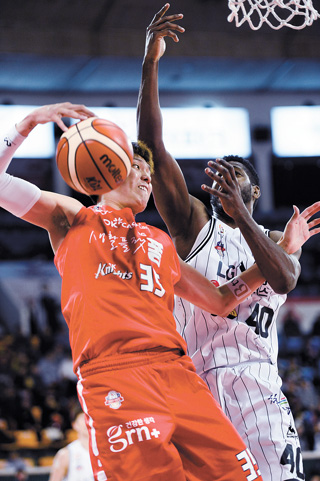 A player to watch for from the Thunders is their import, Ricardo Ratliffe. A center from Missouri, Ratliffe played in 53 games for the Thunders last year after moving from Ulsan Mobis Phoebus, averaging 20.02 points and 11.8 rebounds throughout the season.

During the match against defending champions Goyang Orion Orions, the import drained 34 points, a game high, and grabbed 12 balls bounced off the rim.

Other than Ratliffe, Moon Tae-young, a player naturalized from the United States and also known as Gregory Stevenson, is also another player to keep an eye on. He’s put 21 points on the board against the Orions.

As for the Knights, the super rookie from Yonsei, Choi Jun-yong, is proving that he’s got what it takes to compete at the professional level.

The 2-meter (6-foot-6-inch) forward has started in all three games the Knights have played up until Thursday, averaging nine points and 10 rebounds.

Although he had little time to adjust to the pro level, he’s been consistent on the court, draining three pointers when necessary and grabbing rebounds for the team under the basket, proving his versatility and wit to play against his seniors. Against Changwon LG Sakers on Oct. 30, Choi grabbed 12 rebounds, his career high, and led his team’s 100-82 victory.